I’ve never been to the little house in Elvaston, but I’m going to have to make a point to drive by and take a look at it one of these days. 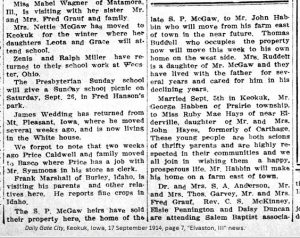 John and Anna (Fecht) Habben had lived on a farm east of Elvaston, Illinois, their entire married lives. It was the farm where John had grown up and where they had raised all their children. And in 1914 they were apparently ready to retire. I likely had found the deed for the purchase of the house thirty years ago back in the day when I only copied things “that I needed” and could afford to copy.  There were no grand genealogical statements in the deed and I already knew quite a bit about the Habben family and, in my experience at the time, I had located the farm where they lived–that was the important thing. And so I did not worry too much about the house.

My grandmother Ufkes was one of John and Anna’s youngest grandchildren and she remembered going to the house to visit them as a child. Anna was still living there in 1941 when Grandma went to visit her after she and my Granddad were married. Anna gave her $5 as a wedding present–right there in that house.

While reviewing digital images of newspapers, I came across a reference to the Habben purchase of the Elvaston house in September of 1914. The Habbens move to town is referenced as is the marriage of their son George in that same month. The fact that George was newly married and going to “make his home on a farm east of town” (one that he rented from his father) was more than likely connected to John and Anna’s move.

Then I read from whom they purchased that little piece of property in Elvaston: the heirs of S. P. McGaw.

The S. P. McGaw heirs have sold their property here, the home of the late S. P. McGaw, to Mr. John Hobbin who will move from his farm east of town in the near future. Thomas Ruddell who occupies the property now will move this week to his own home on the west side. Mrs. Ruddell is a daughter of Mr. McGaw and they have lived with the father for several years and cared for him in his declining years.

Samuel McGaw’s descendants eventually left the county and moved elsewhere. Several of his children had moved away before he died.  Growing up relatively near Elvaston, McGaw was not a name I recognized. There’s no one with the name living in the immediate area and when I likely located the record copy of the deed to the house thirtysome years ago, I did not recognize it.  There’s a copy of it in the Hancock County Courthouse.

But now I recognized the name.

You know where this story is going.

That document is their marriage record–the third great-granddaughter is my daughter.

So ancestors of my daughter and her husband both lived in that little house in Elvaston–just at different times.

There is one genealogical lesson here aside from the serendipity. The marriage of the Habbens’ son George dovetailed with their moving from the farm. Everything needs to be looked at in context. Sometimes the “reasons” for things can be clearly determined blatantly, sometimes they can be reasonably inferred from a record, occasionally they can be inferred from a series of records (indirect evidence), and sometimes we simply don’t know what happened.