Ancestry.com‘s database, “Missouri, Death Records, 1850-1931,” contains a “Physican’s Certificate of Death” for Wilhelmina Rothweiler who apparently died in Belleville, Illinois, in 1897. On the surface that seems a little strange. 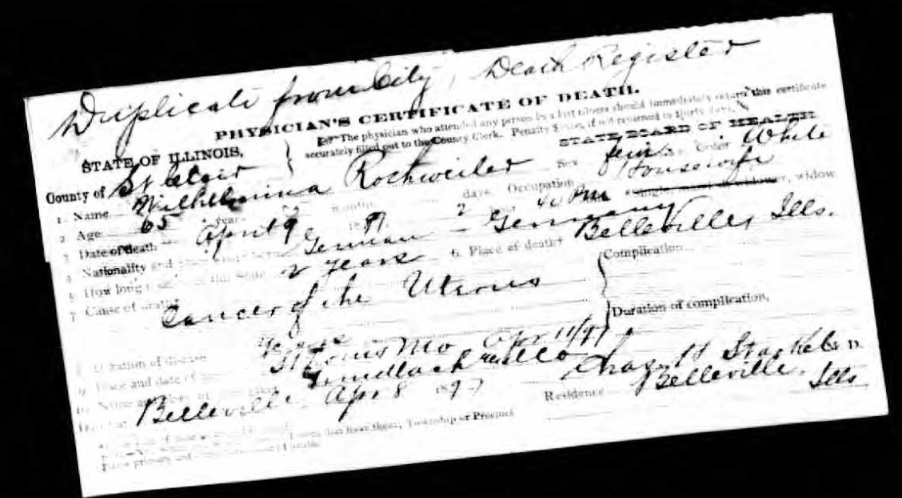 Ancestry.com styles these records as “Missouri Death Records,” but a scanning of a few images before and after this image indicate that other documents filed along with Rothweiler’s are burial permits for burials within the City of St. Louis. That’s where Rothweiler was buried as indicated on the certificate.

A very small sampling of the adjacent documents discovered that they contained references to the bodies not having any contagious diseases and there were no issues with them being buried. It seems reasonable that this death certificate, which indicated that Wilhelmina died of uterine cancer, served as a permit for burial within St. Louis City limits given her cause of death.

I’m going to have to think about how to cite this item–I’ll reference the title of the Ancestry.com database, Wilhelmina’s name, and date of death. The Ancestry.com site’s description of this database really does not provide any other significant details and the browse image option does not really provide any real good clues either. I’ll have to do some more digging. I can still site the record–but I’d like to make certain I’m correct on what it’s purpose actually was.

The image makes a good reminder of browsing other items in the collection from which a record is located. There may be contextual clues there that are helpful in the analysis of the item. Whatever I infer about the document from those adjacent records should be recorded in my notes regarding the document.