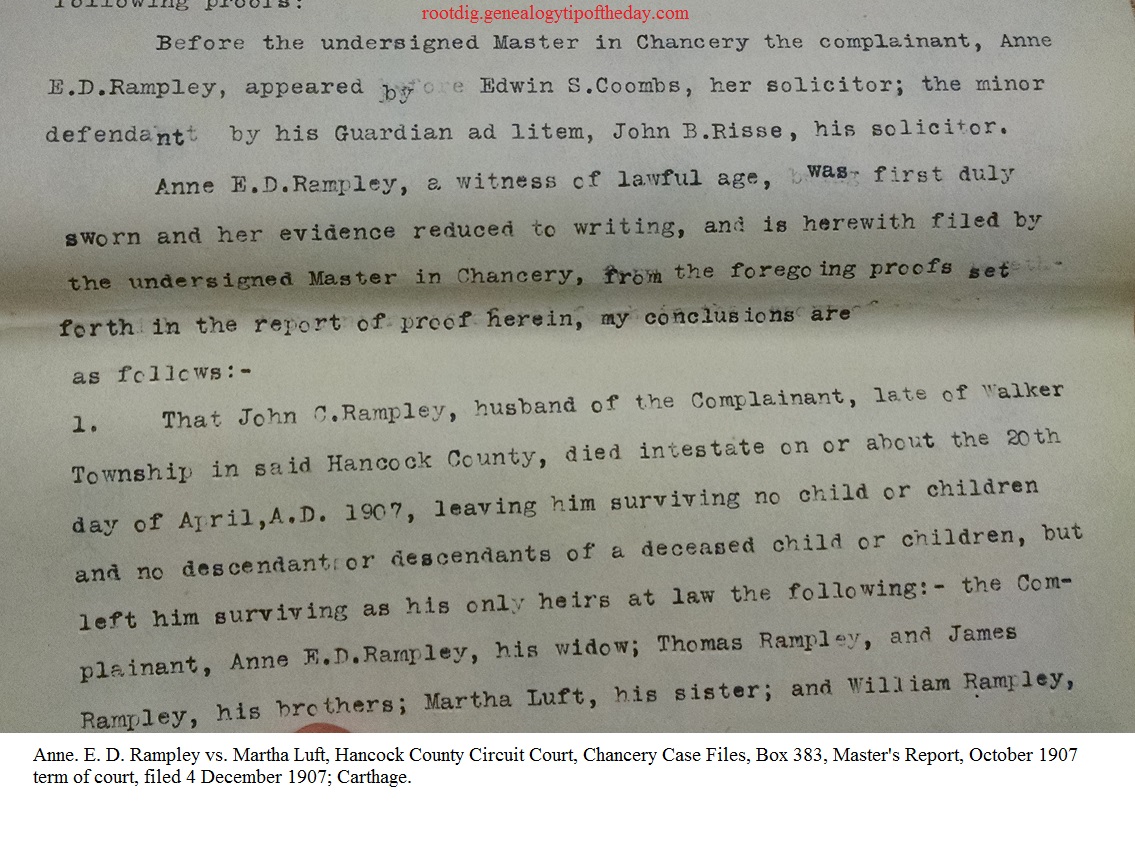 John C. Rampley died in Hancock County, Illinois, in 1907. He owed real estate, had a widow, no children, and left no will.

That’s a problem for his wife and a research opportunity for the genealogist.

John’s widow, Anne E. D. Rampley, had to file a partition suit against her in-laws in a Hancock Count court. Because John died owning property and left no will, she and his siblings were joint owners to his real property. Intestate succession provided the wife a portion of the husband’s real estate, but the rest went to his heirs. In this case those heirs were his siblings and their descendants.

The Master in Chancery presented a report for the court at the October 1907 term of the court. Part of that report indicated that John C. Rampley, was survived by the following family members:

But what sort of source and information is this?

I looked at the original copy of the Master’s Report, signed by the Master in Chancery. This is an original source. The information…well that’s a little more problematic.

The only person providing testimony in this court case is Anne E. D. Rampley. The defendants do not testify and there does not appear to be any sort of legal wrangling when reading through the court documents. This case results from the fact that all the heirs of John C. Rampley (including his wife) were joint owners in the property. Anne needed her portion “set off” from that of the other heirs. A partition suit was the easiest way to do that.

There is a great deal of information in the file, but the crucial information for me at this point is the relationship information. It was provided by Anne in her testimony and in her original petition to the court to initiate the partition suit. She would have known who were husband’s siblings were believed to be. Given the rural nature of the area, she likely was aware of the births of her brother-in-law’s children. On the surface, it would be safe to say that Anne knew who her husband’s siblings were because she had been told of that relationship (and had likely seen the sibling relationships acknowledged and accepted by neighbors in the community) and she knew that Riley’s children were his because she had lived in the area when the children were born.

There’s no reason to doubt that the relationship information is correct and it’s a larger issue than whether Anne was a reliable informant or not.

Because if she had included someone who really wasn’t an heir, someone would have noticed.

If she had omitted an heir, someone would have noticed.

That’s why there are public notices of court actions. That’s why people are “served” notice. All the Rampleys who were defendants in this case (all the “family members” listed above in the bulleted section) received notice. It seems doubtful given the public notice and the individual notices that someone was “left out” or that there’s an error in the list of heirs.

But it never hurts to think about how reliable information is.