After some time, I completed my chart of the cluster of shared DNA matches I had at that started with the person who had a Neill from NewtownLimavady, County Derry, Ireland, in their tree (“Charting My Cluster of Matches…”). Smaller spreadsheets like that are sometimes more helpful than using the entire spreadsheet of matches.

There is one person in the cluster whose shared matches I’ve not added to the cluster–more about that in a minute.

Like many clusters, looking through them makes one feel like they are going in circles. Essentially that is true–shared matches of other cluster matches will be repetitive. The researcher is coming at the same matches from a different relationship–you’re going to get the same names over and over. That’s why keeping track of them is essential so that you know which ones have already been noted and so that the researcher does not keep “looking into” the same ones over and over.

I was just about “done” putting the cluster matches in my chart (the “made list of shared matches” from the earlier post really should have been “added to my list) as I was not getting many new names. 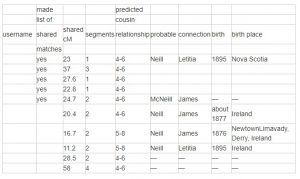 And then there was a “new shared match” that appeared (we’ll refer to it as “PeaDea”)–a name that had not appeared as a shared match before while compiling the cluster of matches. It was only a shared match with one person in the Limavady cluster.

The name was not new to me. I recognized it and knew exactly who the person was without doing any additional research. It was a cousin match that I had not really looked at in much detail before, not because I was not interested in it, but because the match was actually a triple cousin and I just not had time to analyze the matches in detail and sort them out. This “new to the cluster” match was actually, like me a descendant of:

“PeaDea” had over thirty shared matches with me and I had not taken the time to sift them out. I knew that several of them were known descendants of the Newman/Sledd family or the Rampley/Chaney family or ancestors from one of those families. I also surmised that many of the “unknown” matches to PeaDea were Sledd/Newman/Rampley/Chaney connections.

But the fact that PeaDea was a Neill descendant and a shared match for one member of the Limavady cluster confirmed that I was on the right track.

It is possible that this one shared match with PeaDea is a descendant of the other two families I share with PeaDea. But there’s another possible reason…and it makes sense when I consider the fact that PeaDea and I are the only descendants of Samuel and Annie (Murphy) Neill  in AncestryDNA who share anything significant with the Limavady cluster.

The other descendants of Samuel Neill who have a test at AncestryDNA all descend from three other children of Samuel. Perhaps that bit of DNA that PeaDea and I share with the Limavady group passed down to the children of Charlie and Sarah, but not to their siblings whose descendants have done tests.