Transcriptions like this make me wonder about Ancestry.com. (We’ve discussed this before in “How does Ancestry.com See?“)

I’ve seen the last name of Rampley written quite a few ways. I don’t ever remember it looking like Ancestry.com does in this 1810 census from Connecticut. If I had to throw out a quick guess, I would say that the last name was Humphry or something close to that.

“Transcriptions” like this lead me to wonder if the transcribers working on these indexes enter in a few letters they can read and “the system” suggests matches from sort of drop-down menu from which the transcriber chooses. I don’t know this for certain, but I’m trying to think of how someone would see this as Rampley. It’s not the most common last name in the world. This transcription just gets me to wondering exactly how the transcriptions are performed.

Usually when one “guesses” at a name, the guess is a name that’s a little more common or a name with which they are familiar. Rampley certainly doesn’t meet the common threshold and I can’t say whether the transcriber was familiar with it or not.

Of course, this does not explain how they arrived at the first name of Clasha. It looks like Elisha to me. The name right above it is in the index at Ancestry.com as Clasha Palmer. If anything at least the transcriber was consistent.

I’ve never gotten an answer from Ancestry.com on my musings about how the transcriptions at Ancestry.com  are done. I’m not holding my breath this time either. 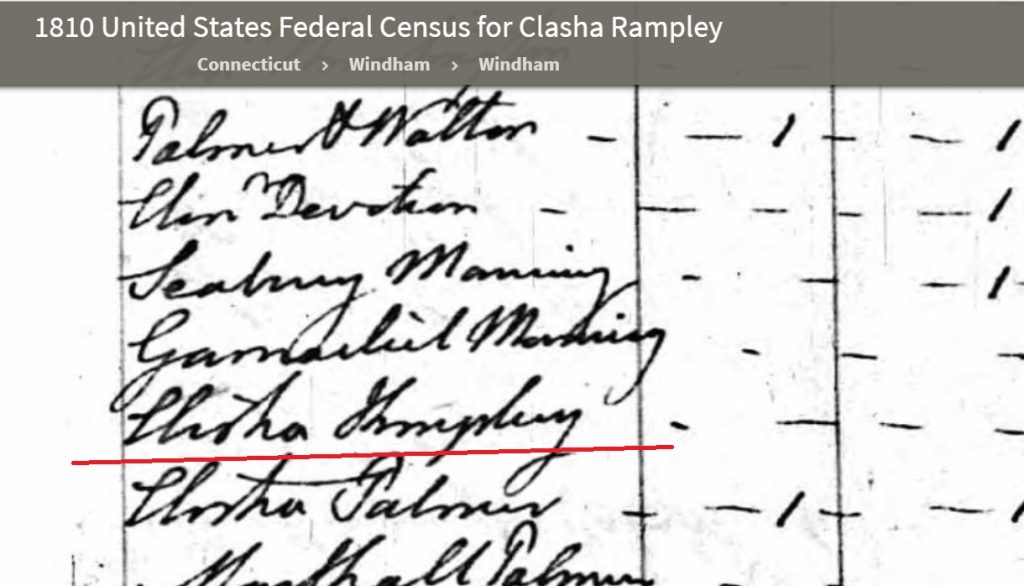