The 1915 Descendants of George Puffer of Braintree, Massachusetts, 1639-1915, contains a wealth of genealogical information. But like any reference it can contain an occasional error. The section on Ephraim Puffer indicates that he died in Stow, Massachusetts in 1757 and that his widow “Mary Crown” relinquished her right of dower in the estate in 1770. 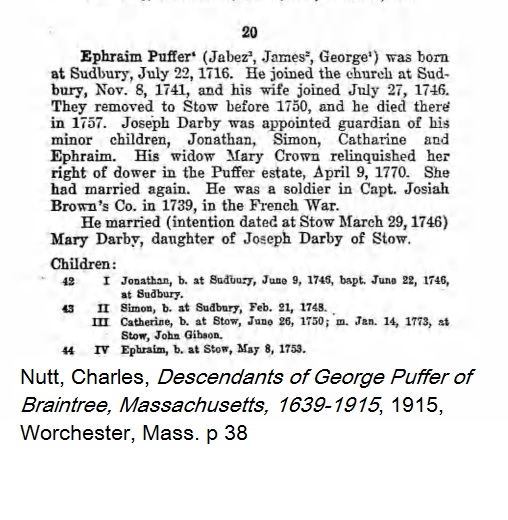 While the book does not contain citations in the modern sense, a careful reading of the section on Ephraim does suggest what records were used-it’s just the locating them that may be difficult. The mention of Joseph Darby as guardian for Ephraim’s minor children in addition to the relinquishment of the right of dower by Mary suggests that probate or estate records were used (particularly since the specific date is given). This may cause the researcher to simply bypass looking at the actual records and assume that the compiler’s information is correct.

That would be a mistake for two reasons:

The compilation of any genealogy the size of the Puffer one is a large undertaking. It’s easy for mistakes to creep in and authors of works of that size often have to choose what to leave in and what to leave out. There’s a later request by the widow Mary to appoint Stephen Gipson (Gibson) as the guardian for her daughter Mary. The request is undated. The fact that it was undated was noted in my citation on the image. That way I know it was undated and not that I simply forgot to include the date. 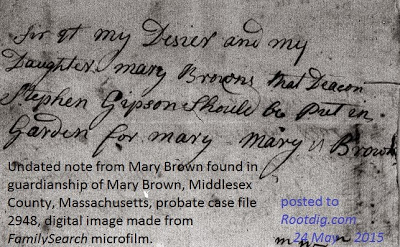 A clear reading of the request indicates that Mary’s last name was not Crown. It was actually Brown. One cannot be certain whether the error in the 1915 publication was a transcription error or a typographical error. It does not really matter. The compiler was human and like any human they made a mistake. It may seem like the mistakes are always on the “family of interest.” That’s not true–it’s just that those are the ones we notice and remember.

Knowing the name is Brown and not Crown changes my research approach on Mary during the time after Ephraim Puffer’s death. If I rely on the 1915 Puffer book, I’ll be looking for Crowns when that’s not what I should be looking for.

If I rely on the book and don’t look at the actual records, I’ll miss the reference to Stephen Gipson being appointed as guardian for the Puffer daughter Mary. Stephen may be a relative of the family as well given his appointment as guardian.

The biography of Ephraim mentions facts that suggest additional research as well. Those items where specific dates are included probably were taken from original records of some sort. Hopefully.