I submitted my father-in-law’s DNA test data to GedMatch (http://www.gedmatch.com). It’s going to be a while before I can really analyze the matches and results there, but that did not stop me from looking at them. 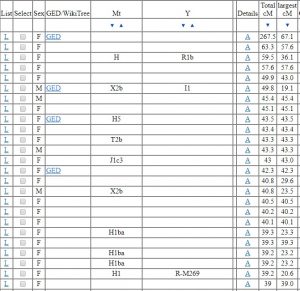 However, when viewing this second cousin match in particular it’s possible that the DNA test I submitted and this match have small amounts of shared DNA outside the Trask relationship. The great-grandfather of testee I submitted and the grandmother of the match were both of Swedish heritage–Swedes who settled in Galesburg, Illinois. The Swedish community in Galesburg was fairly large, but since I’ve not compared these Swedish heritages it’s possible that there’s a link lurking in that background as well.

I then decided to look at the first few matches that had a GEDCOM file attached to them. It’s a very selective procedure, not exhaustive, and certain to overlook leads. I am aware of its limits. But it’s fast and I was hoping that there might be some sort of “breakthrough” or lead in these files. I’ve done this approach with the other two DNA samples I’ve submitted to GedMatch and had no immediate luck.  I was going to look at the trees generated on GedMatch from the GEDCOM files and see if any names stuck out. It’s not an efficient process. It’s not recommended as the only way to go through your matches. But it is fast.

A match with 49.8 shared cM had a tree and that tree had several ancestors with the last name of Ramsey. No other name stuck out. In viewing that tree, I saw that it contained a reference to a Lucinda Ramsey (1821-1861 Mercer County, Illinois). She was the mother of George Trask and the file contained the name of her father. A shared cM amount of 49.8 is consistent with a third cousin relationship (which would be the correct “paper pedigree” relationship). Looking at the pedigree of the match, no other names stuck out as being in my father-in-law’s background. It’s always advised to consider the possibility of another relationship–not just the one that “jumps out” at you immediately.

There’s more yet to do.