In February of 1814, Caty Roe was “warned out of Addison, Vermont, and told to “Depart Said Town.” 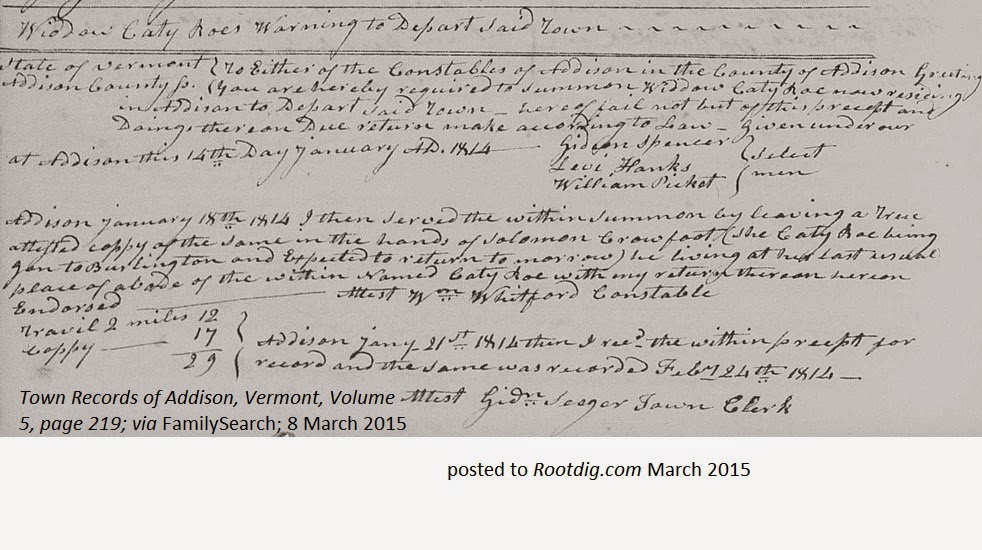 The order to ask her to leave was dated 14 January 1814 and signed by Addison’s selectmen Gideon Spencer, Levi Hanks, and William Picket. William Whitford, Constable, attempted to serve notice on Caty.

Except she wasn’t home on 14 January 1814 when the notice was served. She was “gon[e] to Burlington and Expected to return tomorrow.” Whitford left the notice with Solomon Crowfoot who was living at her “last usual place of abode.”

What Caty was doing in Burlington in 1814 is another story and one that I don’t know. It is nearly thirty miles from Addison and most likely not an easy trip in the winter for a single woman. What Caty’s connection was to Crowfoot (if any) is not known at this time. Preliminary research does not indicate that he is a member of her extended family, but it is possible.

The warnings out were usually issued to newcomers who were either undesirable or had no means of support. Caty was a widow and her financial situation at the time of her warning out is not known. It’s possible the town of Addison did not want a family without means of support living there. Whether she immediately left Addison is not known, but she is known to have lived in other locations in Vermont.

Her sister, Sarah (Gibson) Sargent’s husband, Samuel was warned out of Addison in 1811. Whether he actually left is another matter.

What I need to check are town vital records to determine where the children of Samuel and Sarah (Gibson) Sargent were born and where Caty Roe’s children were born. The Sargents were having children around the time of Samuel’s warning out. Roe was not. That would help to provide a partial  migration chronology for both the Sargents and for Roe.

They might have been warned out of more than one Vermont town.