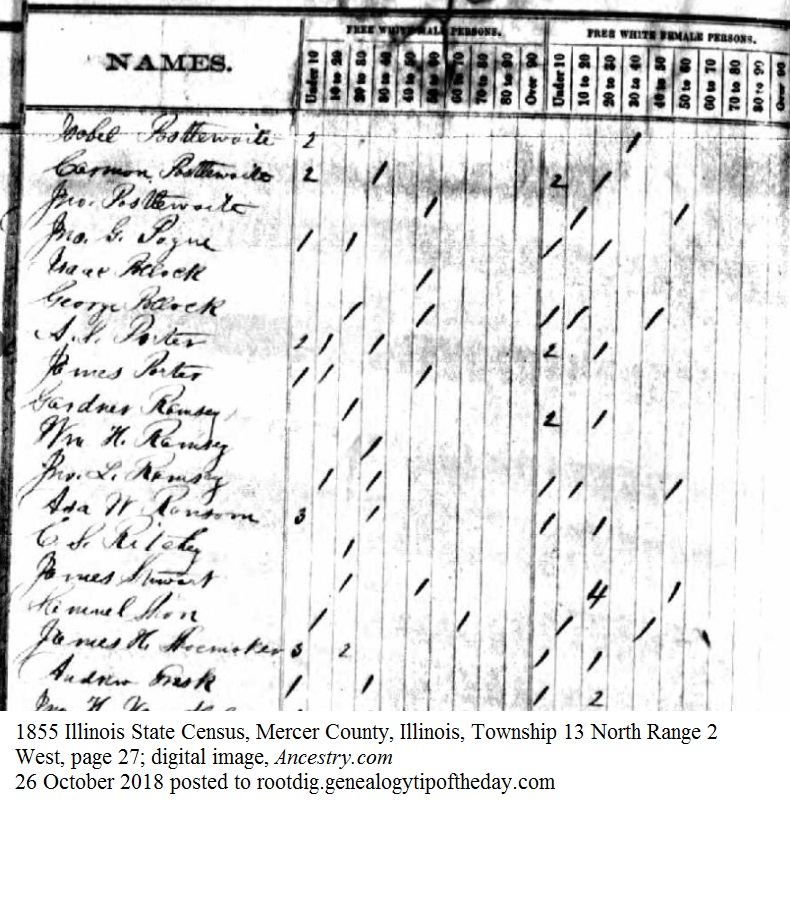 Census records that only list heads of household are one of those records that people sometimes overlook. After all, what can I learn from an enumeration that includes other family members only by tally marks?

The answer is quite a bit–sometimes.

The children under ten are likely Andrew and Lucinda’s children. The oldest male is likely Andrew and one of the older females is likely Lucinda. Who is the other female in the 20-30 age range? The most likely possibility is that she is a sister of Andrew or Lucinda. Other scenarios are possible, but an unmarried sibling living with the young couple seems the most likely scenario.

The more interesting question is the identity of the three Ramsey men living in the same township: Gardner, Wm. and Jno. Gardner appears to be living with his wife and young children. Wm. is living by himself. Jno. is a little bit more difficulty to quickly reach a hypothesis on–particularly if this enumeration is the only information available. It’s very possible he’s the head of a three-generation household, given the household tally figures:

Conjecturing the situation is best done when more information has been obtained.

What’s key here is that there are three households headed by Ramseys living in the same township as Andrew and Lucinda (Ramsey) Trask and that those men are of an age to be her possible brothers. Further research on the men is warranted to determine if they are connected to Lucinda

The Ramseys are living in the same township as the Trask family. They are enumerated on the same page. However the arrangement of the census appears to be based on first letter in the last name of the head of household. That strips any geographic clues from this enumeration–other than the fact that they lived in the same township in Mercer County, Illinois, in 1855.