A little review of the Ancestry.com’s “U.S., Evangelical Lutheran Church in America Church Records, 1781-1969” in light of their recent update cause me to discover a set of Lutheran Church records for West Point, Hancock County, Illinois.

The provenance of just where Ancestry.com obtained the book is not really clear. The “source information” on the database makes the general statement:

This leads me to believe that the item was (is) in the archives of the ELCA in Chicago. The congregation in West Point (actually referred to as St. Luke’s Lutheran Church) is no longer an active congregation and it seems reasonable that their records would have made their way to the church archives. A notation in one of the pages of the ledger suggests that ledger was at one point in the archives of the Lutheran Church of America (a forerunner of the ELCA). The PR14.18 is likely some sort of call number or accession number.

The ledger itself is composed mostly of church history and congregational meetings and ministerial appointments. Based upon a few quick searches, it does not appear to have been indexed in Ancestry.com‘s database of individual references. There is no extensive listing of funerals, baptism, and marriages, possibly because the congregation was fairly small. Searching the ledger will require a manual, page by page search.
There was one reference in which I was particularly interested–Joseph and Jennie Neal being received as members by letter on 10 March 1888. This likely is a reference to Joseph Neill and his daughter Jennie who were living near West Point at the time. No other information about the Neills is included in the ledger. I would not have found the reference had I not viewed the ledger page by page. Joseph’s in-laws, the family of Agnes Harper, also appear to have attended the church for a time as well. The Neills and the Harpers were Irish protestants and the Lutheran church would have been the nearest non-Catholic church. 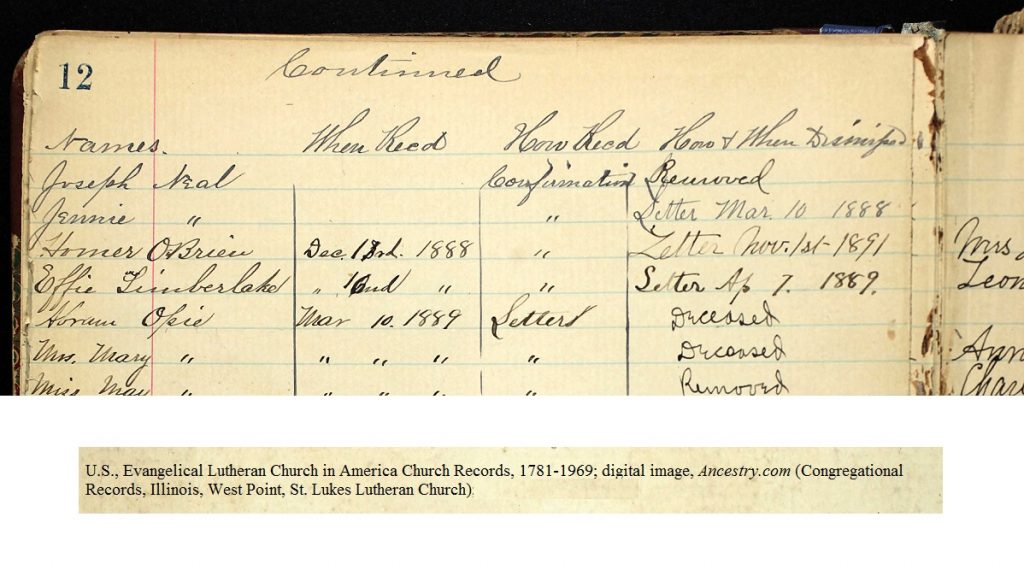