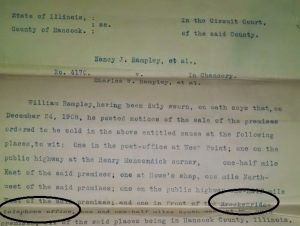 I never really gave much thought to when the telephone came to areas where my ancestors lived. Now that I think about it having a broad understanding of how our ancestors likely communicated with those near and far isn’t necessarily a bad idea.

Because of my lack of knowledge about the phone system in rural America, I was surprised to see a 1909 reference to a telephone office in a court case in Hancock County, Illinois. When asked where he had posted notices of an upcoming sale, William Rampley listed several places:

The posting of these notices is common as is the mentioning of them in court records. The purpose of these notices and the proof of where they were posted is to make certain that the public was adequately notified. I’m always interested in seeing where these notices were published–it indicates where the local gathering places are. The post office seemed like a logical place to post such a notice and the other places were obviously ones that many people frequented or passed on their way to somewhere else.
But Breckenridge was not a very large place in 1909 and I was surprised to discover they had a telephone office.
All because I read where the auction notices were published.
Court records can sometimes provide unexpected insight and not just statements about our ancestors.
Added to my ever growing bucket list is finding out when telephone service came to Hancock County’s Walker Township. I doubt many of my families had a telephone in 1909. But I could be wrong.
Assumptions are like that—they can get us in trouble!