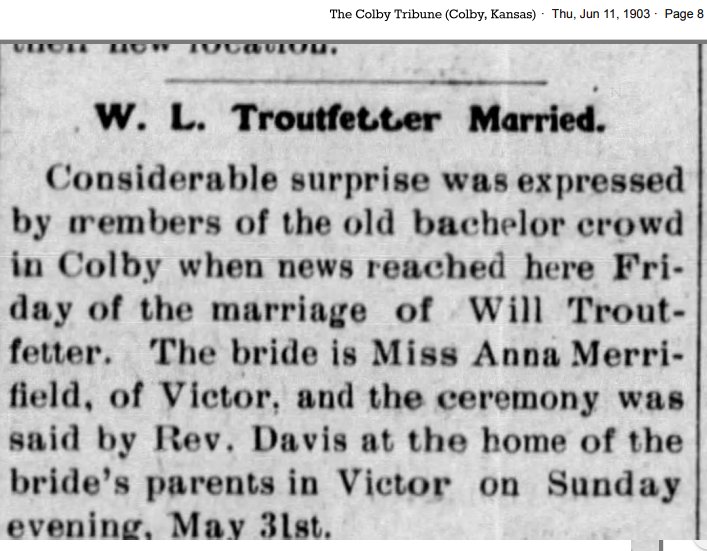 I almost missed the 1903 reference to the marriage of Will Troutfetter and Anna Merriman in a June 1903 issue of the Colby Tribune, printed in Colby, Kansas.

Troutfetter’s not the most common name in the world and the search for relatives is occasionally like picking low-hanging fruit. Sometimes.

What Could Be Missed

This reference was almost bypassed because I had stopped looking for Troutfetter references in 1902 and 1903. After a chase across the western hemisphere (literally), William’s brother was arrested in Boston, Massachusetts, and returned to Colorado for trial in a financial fraud scandal. His arrest made newspapers across the country in 1902.

So did his acquittal on the charges in 1903. There were so many references to him in those years that I almost quit looking for Troutfetter references during that time period–almost. I could have had removed from the search results items matching keywords involving the brother, including:

But I chose not to because I was afraid of missing something. Any search process that eliminates items from the results must be done while remaining aware that any elimination may cause other items of interest to be overlooked. It’s fine to limit searches as long as the researcher is aware of how the limitation may impact the results.

Troutfetter was around 33 years of age when he was married. Apparently that qualified as an “old bachelor” in Colby, Kansas, in 1903. The reference serves as a reminder that certain words and phrases can have meanings that change over time and that what was true in 1903 might not have been true in 2003 and that researchers need to take care when interpreting phrases in old documents or newspapers.