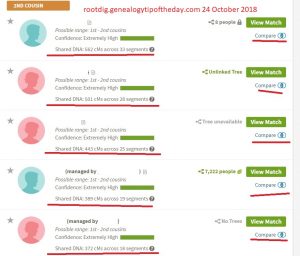 That’s true for DNA as well.

When looking at the amount of shared DNA you have with a known relative, it’s good to be average–or at least within the expected range of shared DNA for the relationship. Unusual values can be cause for concern.

I was curious if my “closer” relatives who had submitted DNA for autosomal testing at AncestryDNA were close to the averages. Data that is significantly different from the expected values is suggestive of more research. A conclusion cannot be reached about one person when all I know is that one person’s shared centimorgans (cM) of DNA is “significantly” different from the expected value.

The relationships as given in this chart were obtained via traditional genealogical methods (ie. not using DNA).  The names as used in this chart have been “altered” for privacy and in an attempt to be clever–the only connection to the individual is alliterative. For the most part, these people were people I either knew or was aware of before I ever knew they had done a DNA test.

Averages are only averages. Researchers should potentially be concerned if the shared DNA falls outside the range of shared cM values for a given paper relationship. In other words, a first cousin once removed who has less than 141 cM of shared DNA or more than 851 cM of shared DNA would be unusual.

Unusual, not impossible. Further work would need to be done.