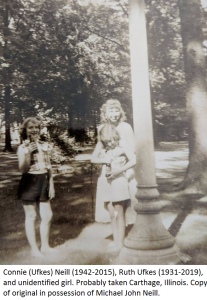 We all have them. Now I have one more. This picture is of my mother, Connie (Ufkes) Neill, and her paternal aunt, Ruth Ufkes. I’m not certain where it was taken, but I’m speculating based upon the age of my mother and the presence of my aunt in the photograph that it was in Carthage, Illinois.

I may not be able to identify the girl in the picture, but at least I will know what I have done in my attempt to determine who she is.