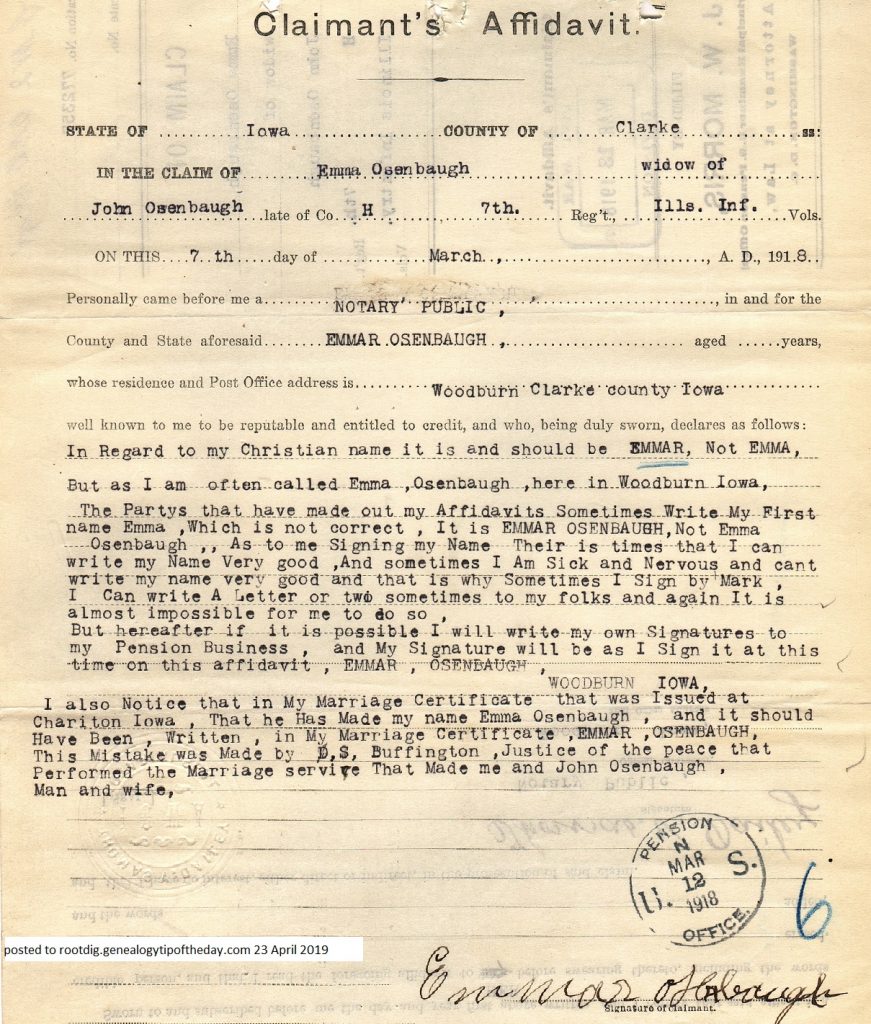 They may call me Emma, but my name is Emmar.

On 7 March 1918 Emmar Osenbaugh attempted to make it clear just what her name was. The locals “here in Woodburn Iowa,” may have called her Emma, but her Christian name was Emmar. Sometimes the “partys” who make out affidavits for her render her name Emma, but they are also mistaken. It wasn’t just her name that apparently irritated the Pension Bureau. The fact that sometimes she signed her name and at other times made her mark apparently irritated a bureaucrat at the Pension Bureau as well. Emmar explained that as well:

There is times that I can write my Name Very good ,And sometimes I Am Sick and Nervous and cant write my name very good and that is why Sometimes I Sign by Mark , I can write A letter or two sometimes to my folks and again It is almost impossible for me to do so ,

But hereafter if it is possible I will write my own Signatures to my Pension Business , and My Signature will be as I Sign it at the this time on this affidavit , EMMAR ,  OSENBAUGH ,

It may seem like the Pension Bureau was picking on Emmar. They weren’t. Inconsistent spellings of names and signatures was one way that officials could detect pension fraud. And sometimes it was a way to make applicants jump through hoops. It’s hard to tell exactly what went on in the minds of the Pension Bureau, but there could be a note in her 300+ page pension application file that was based upon her husband’s service.

Her 6th husband’s service. She’d divorced three of her previous husbands, married before one was actually dead, didn’t know exactly when one died, and married one twice. That probably had nothing to do with it.

Emmar actually received her pension once her marital history was clarified. It’s probably the best pension file I’ve ever encountered and one can almost hear her talking to the clerk who made out this affidavit.