It’s easy to sometimes gravitate to or from certain sources based upon our life and research experience. For me city directories are one of those sources that I don’t immediately think of to utilize in my research.

Most of my families were very rural and usually owned just enough real property to warrant an estate settlement (even if  the judge orders the farm to be sold to pay the mortgage).

While I could have used the online search form at Ancestry.com,  I decided it would be easier to manually search the directory for Emmar and her ex-husbands in the Lincoln directory. I was not certain how her name would appear in the directory and was also concerned that the OCR process would mangle her name. Sometimes it is simply easier to search page by page yourself. It’s also a great way to make additional discoveries.

This item was located in Ancestry.com‘s “US City Directories 1822-1989.” publication of the 1873 Lincoln City Directory. 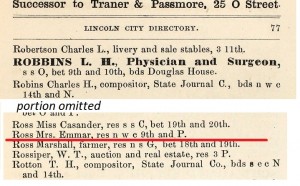 It indicated that Mrs. Emmar Ross resided at the northwest corner of 9th and P. Emmar may have owned her home or rented. No occupation for her is given in the directory.

I knew Emmar lived in Lincoln during this time period because of statements she made in her Civil War widow’s application. Given her several marriages, I did have to know the right married name in order to locate her. I actually searched for her under her first three married names in case she had reverted back to one of them. Her first, second, and third marriages ended in divorce.