Names can create all sorts of problems for the genealogist.

The first illustration in this post is from a search of the  ELCA (Evangelical Lutheran Church in America) records at Ancestry.com that was conducted for the name of Sartorius in the location of Carthage, Hancock County, Illinois. The search interface will bring a result as long as the name Sartorius is anywhere in the record. That’s not the issue. Ancestry.com only indexed the names of the child and the parents when creating this database. Godparents were not indexed and that’s one limitation to this index.

I was already familiar with the names that came back as my results. Based on my ancestral background and the number of years I’ve researched these families, I’m reasonably aware of most of the families who were members of the congregation from which these matches came. The first five results were familiar to me. The first four were for individuals whose last name was actually Sartorius and the fifth was for an individual whose mother was a Sartorius. Because the mother’s maiden name was a part of the record, the entry for Kathrina Margaretha Adams was returned. That’s easy enough to figure out.

Trientje Bruns’ entry was for a marriage to Ulfert Sartorius.

The last two confused me. No one in the Sartorius family married a Dirks or a Gerdes. Since the godparents are not indexed as a part of the “record” at Ancestry.com that’s not the reason why the items came up.

What Ancestry.com sees as the individual’s last name has been underlined in the first illustration. And that’s where the problem comes into play. 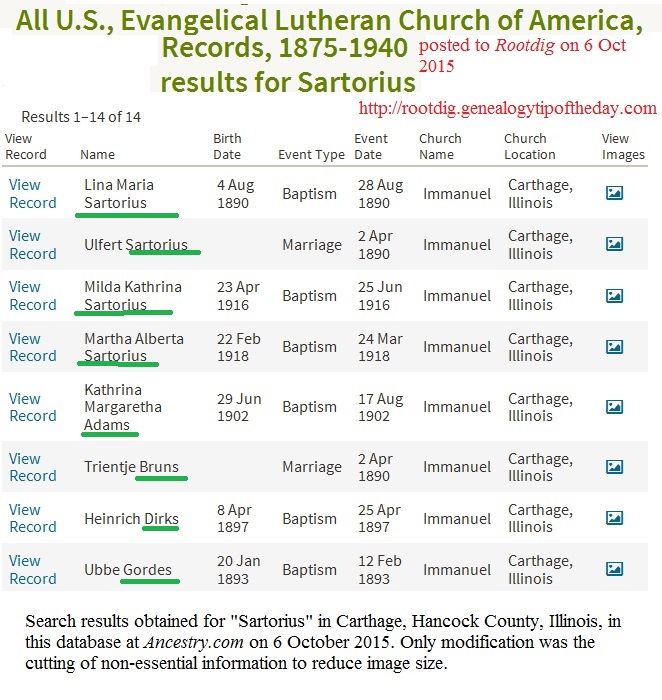 The child listed as Heinrich Dirks did not have the last name of Dirks. The individual listed as Ubbe Gordes[sic] did not have that last name either. Viewing the images from the actual records made the problem a little more clear. 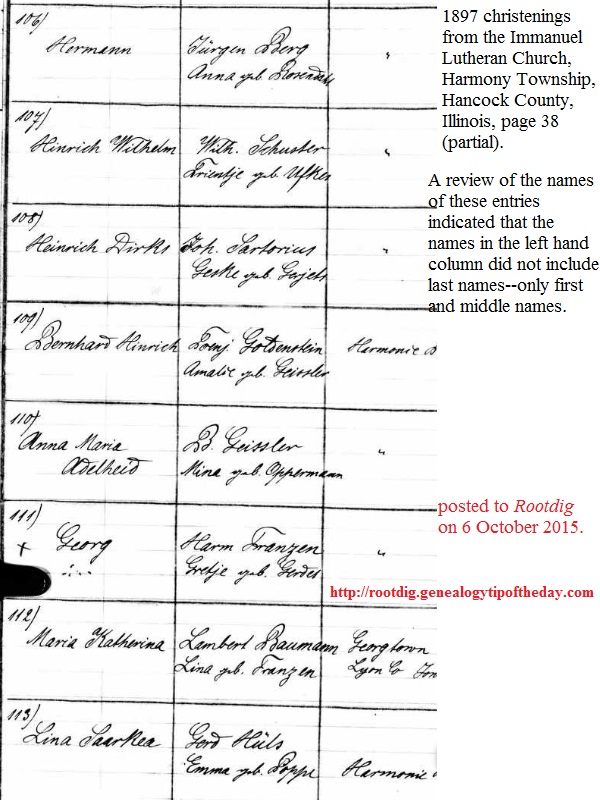 Many of the congregants of the Immanuel Lutheran Church in Hancock County, Illinois (actually located in Harmony Township) were Ostfriesian. It was a common Ostfriesian practice at this point in time to use an ancestral surname as a middle name. That’s what happened in these two cases.

Apparently Ancestry.com was selective in choosing to enter in the second name as a last name. The last entry in the first image is for Lina Saarkea. She is indexed correctly with the last name of her father: Huls.

The same issue is the case with the 1893 entry for Ubbe Gordes. He is actually Ubbe Gerdes Sartorius, son of Ulfert Sartorius and Trientje Bruns. Gerdes is his middle name.

There’s a variety of lessons here:

Informed users of databases are always better equipped to use the database more effectively than those who simply enter names willy-nilly.