Ancestry.com recently added this wonderful database of fire insurance records in Ostfriesland, Germany (between 1768 and 1937) to their site. Admittedly I have a slight learning curve with these records. The other problem is that since half my ancestors hailed from Ostfriesland, I have numerous ancestors in these records. 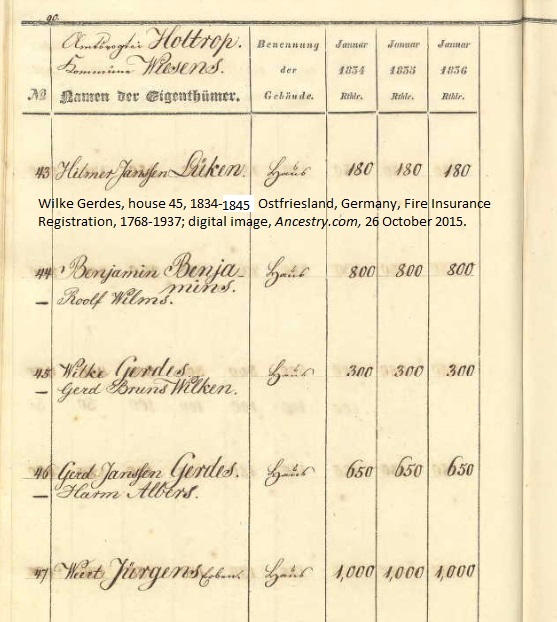 The illustration chosen is from entries in Wiesens in the 1830 time frame. The person of interest is Wilke Gerdes, who died there in 1836. It looks like (based on the entry) that Gerd Bruns Wilken was the insurance holder for part of the time period. The book does not indicate when the change took place. What is known is that Gerd Bruns Wilken was the son of Wilke Gerdes and resided in Wiesens until his death in 1867. It might be worth a followup in later entries until Gerd’s death.

This entry by itself isn’t proof that Gerd Bruns Wilken is the son of Wilke Gerdes–although based upon the use of patronymics during the time period, the last name does “fit” (Wilke Gerdes would have children with the last name of Wilken). A quick look at the other entries on the page does not indicate the same potential father-child pattern–at least based upon names.

Stay tuned…we’ll have more on this wonderful database of records in future posts.