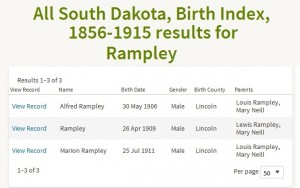 I can never tell just how Ancestry.com updates anything, but the “South Dakota, Birth Index, 1856-1915” is showing as updated, so I decided to search for my aunt and uncle in the database.

The results were not surprising, but they brought to mind three things that are good reminders:

“My Aunt and Uncle”

Typically when one refers to a couple as being their “aunt and uncle” it is because one member of the couple is related by birth and the other is related by marriage. Usually I put the one related to me by birth first, just to be consistent. I realize not everyone makes that distinction. In this case it does not really matter which one I list first. Mary (Neill) Rampley is my aunt because she’s my great-grandfather Neill’s sister. Louis Rampley is my uncle because he’s my great-grandmother Neill’s brother.