The devil may not be in the Social Security Death Index, bu 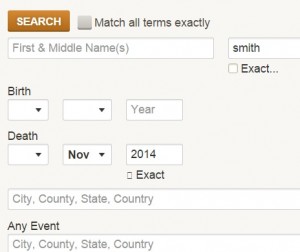 t he certainly is in the details of searching it.

Ancestry.com is on of several sites offering their incarnation of the “Death Master File” maintiained by the Social Security Administration. Ancestry.com styles their version of this database as the “Social Security Death Index, 1935-2014.”

Unsuspecting users may think that the index includes entries for all of 2014. They would be mistaken. There are no Smiths in the database for October of 2014 (check for yourself). It’s not because no Smiths died in the United States during that month. It’s not because Ancestry.com made a mistake. It’s because Congressional legislation passed in late 2013 impacted when information in the “Death Master File” could be released to the public. Public Law 113-67, passed on 26 December 2013, which went into effective three months after its passage set the timeline for which information from the file could be released to the public.

Because of this, one will find Smith deaths from January of 2014 in the index. It is all about the timing.

It never hurts to read the fine print. Titles can be misleading. The date legislation is passed is not usually the date on which it is effective.

And when a database covering the entire United States has no Smith deaths for an entire month, your genealogical radar should indicate that there’s something not quite right.