A search of the “World War 1 Draft Registration Cards, 1917-1918” indicated that there were 132 entries for registrants with the last name of Smith born in 1918. 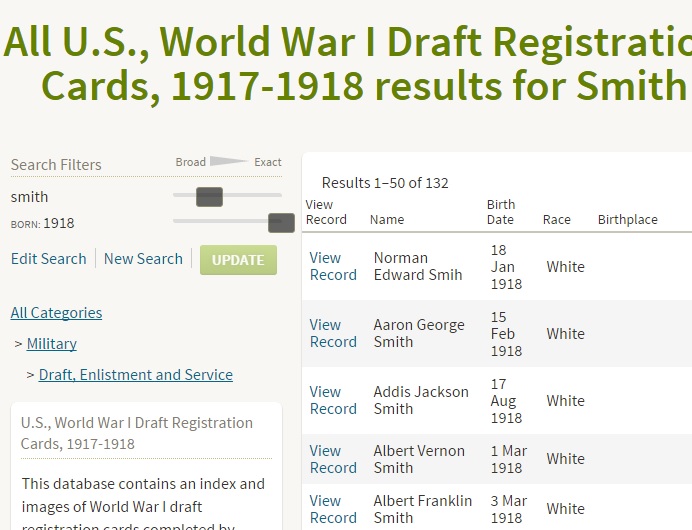 How can there be World War I registrants born in 1918?

The simple answer is there were not World War I draft registrants born in 1918. The knee-jerk reaction might be that Ancestry.com‘s transcriptionists are at it again, making mistakes that only make genealogical research more difficult. That would be an over-reaction. 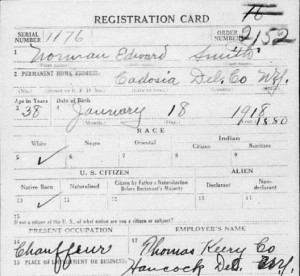 transcribed date of birth for Normal Edward Smith in Ancestry.com‘s database is 1918.

It is 1918 because that is what is says on the card. The registrar made a mistake on the card and confused the year of registration with the year of birth. It is an easy mistake. The card in the illustration has the year of 1880 written underneath the incorrect year of 1918. Other cards do not have this correction.

While transcriptionists do make mistakes, it is important to remember that the prime directive of someone transcribing a document is to:

The temptation sometimes is to “correct” these errors, which Ancestry.com encourages on their site. The problem is that sometimes researchers confuse transcription errors with actual errors in the record. There’s a difference. Our job as researchers is not to correct records that have already been recorded. Our job is to analyze and interpret them and create a story of those relatives that is as accurate as possible.

If I were using this record in my research, I’d transcribe it exactly as written–and then include a notation about why I think the year is wrong and give a valid reason. It’s ok to think a record is wrong, but the reason why we think it is wrong should be more substantial than “my gut tells me so.”

Note: If the headline of this article didn’t make you shake your head and wonder, it’s time to brush up on your history (grin!).