We’re reprinting this article I wrote for the former Ancestry Daily News in 2002. It’s still relevant today. Reprint requests should be sent to mjnrootdig@gmail.com. You are welcome to link directly to this article. 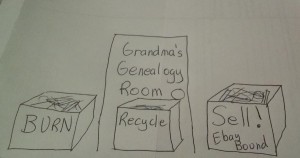 It has been nearly a year since fictional genealogist Barbara passed away. Her daughter Charlene reflects upon that year in a letter to her friend Karen. Charlene truly has been busy. Barbara is probably rolling over in her grave.

As usual, my cards are late. It has been a busy year.

We spent much of the year settling up Mother’s estate. The house sold well, but cleaning it took longer than we expected.

You are probably the only person who did not know Mother was a genealogy buff. She told practically every human she encountered. I’m convinced that genealogy “nut” was the most accurate phrase. The stuff was all over the house. The inheritance would have been enough to pay for my new Mercedes had she not insisted on spending money on that blasted hobby. I don’t know why she couldn’t be more like Tom’s mother. Nadine spends her day doing needlepoint and watching reruns of 50s television shows. Tom just does not realize how lucky he is, but men never do. My mother had to run off to cemeteries and courthouses. She even went to a conference in Davenport, Iowa, last year! Can you imagine? Davenport, Iowa! After she got back, she was so excited about all that she had learned and all the fun she had. She was planning on going to another one in California this year. Well the grim reaper took care of that.

Because of my promotion to head of knick knack sales at Garbageforless.com, I had not been home for several years. I was appalled to learn that Mother had converted my old bedroom into her family history “headquarters.” My shelves of Teen Beat and other magazines documenting my adolescence had been replaced with old family photographs, copies of old documents, and something called family group sheets. She even got rid of the pants I wore to my first junior high dance. I cried at the thought.

I could not bear to go in the room and be reminded that my childhood had been stripped from me and replaced with an obsession with the past. I told the children that if they would clean the room and prepare the items for the garage (should I say “garbage”?) sale they could have the proceeds. I learned what true entrepreneurs they are.

Susan took the old photographs to a flea market and was able to sell many of them. Some special labels had to be taken off and we had to take them out of protective envelopes. Mother had written the names on the back of many of them. At least none of those pictures of depressing old dead people had our last name written on them. I don’t want to be associated with such sour people.

Mother had some type of old plat book — whatever that is. Kenny tore out the pages individually and sold them separately on Ebay. It was so clever. His dad said he got much more than if he had left the book in one piece.

Susan didn’t tear the bibles apart though. I thought that showed tremendously good sense. She’s learning that not everything can be marketed in the same way. The 1790 bible brought her a good penny, but she couldn’t get the one from 1900 to bring more than fifty cents. She donated it to a local church, and here is where I am so proud of her. We can write if off as a charitable deduction. Someone had written what they had paid for the bible on the back cover. Susan converted that to 2001 dollars and will use that for our tax deduction amount. I’ve already enrolled Susan in tax lawyer summer camp this coming August.

There was some old large certificate of written on heavy paper. The silly thing wasn’t even in English, so why would Mother keep it? Kenny used the other side to keep track of the things he had sold. Waste not, want not. When we were finished we put the paper in the recycling bin.

The kids put an old wedding dress from the 1870s in the washer to get the stains out. It was terribly filthy. The worthless thing didn’t even survive the extra long cycle and the half-gallon of bleach. It’s doubtful we can even use it for cleaning rags.

The dress was in some kind of old trunk. I’m not certain what it was for, but it had a name stenciled on the front in huge letters along with the name of a town. Susan gave it a good coating of red paint and sold it as a toy box.

The filing cabinets were emptied of their contents, as were the three shelves of binders. Kenny got the bright idea to shred the paper and sell it in bags as New Year’s confetti. The file folders were too heavy to shred.

The baby did not react well to any of this. She cried and fussed almost the entire time. Kenny thought she wanted tea, which made no sense to me at all. As she cried, it sounded like she was saying “family tee.” She can’t even talk yet and I think Kenny was hearing things. The baby does look exactly like my mother though, it’s the oddest thing. The fussing didn’t stop until she spit up an entire bottle of strained prunes on my junior high jeans, which we did find in the basement. They were ruined — it was the one real loss. Now my past has really been taken from me — magazines and all.

Whether you have a child like Charlene or not, have you thought about what might happen to your genealogy collection upon your demise?

You can get Rootdig in your email every day free by subscribing here. Also check out the Genealogy Tip of the Day book full of short, helpful, practical research tips.