Sometimes one record simply begs more questions. That’s the case with the application for a military service headstone for John Ehmen who served in an Illinois unit in the Civil War. 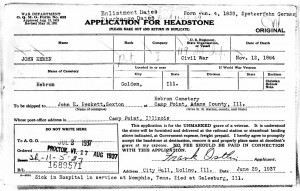 There is a lot of information on this application for headstone for John Ehmen:

John’s enlistment date, discharge date, unit, illness comments and death location should be referenced in his military records. Even if his date and place of birth is listed in the military records, it would be secondary information.

Another question is why someone whose address was the Moline City Hall was the applicant for the stone. Researching John Ostlin may be in order. It is possible he is a family member of some sort or he may have worked for a veteran’s organization that oversaw the procurement of stones for unmarked veterans’ graves. John Ehmen would have no immediate family living in Illinois in 1937. His siblings were all dead and had moved to Nebraska within twenty years after the war. He did have first cousins who remained in Illinois, but by 1937 most of them were deceased as well.

John’s card has a fair amount of information on it.

Why he died in Galesburg, Illinois, is another question. That, like the questions regarding his service could be confirmed from his service record.

And, I need to see if I can get an image of the tombstone.

The digital image of this card was obtained from Ancestry.com‘s “Headstone Applications for Military Veterans, 1925-1963.” This database was digitized from Applications for Headstones for U.S. Military Veterans, 1925-1941 which is from National Archives microfilm publication M1916. These cards are also available on FamilySearchhttps://familysearch.org/search/collection/1916249.