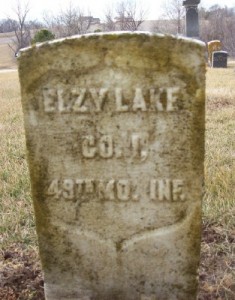 Stone of Elzy Lake, Elliott Grove Cemetery, Brunswick Township, Chariton County, Missouri. Photo used by permission of Sylvia Whaley who posted it to Elzy’s FindAGrave page. Other use not permitted.

There’s a military service stone in the Elliott Grove Cemetery in Chariton County, Missouri, for an Elzy Lake. Based upon its appearance, it’s been in the cemetery for some time and has seen its fair share of exposure to the weather. The tombstone picture used in this post was not taken by me. It was originally posted to FindAGrave and is used here with the permission of the photographer (we don’t post images created by others on this blog without their permission).

Since Elzy had a military stone based upon apparent Civil War service, there should be a record of that tombstone in “United States, Records of Headstones of Deceased Union Veterans, 1879-1903, NARA microfilm publication M1845. 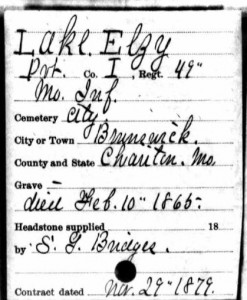 There is not just one record. There are two. One indicated a stone was obtained in 1879 and the other indicated a stone was obtained in 1884. I am not certain why there are two cards other than maybe the first stone was never placed on his grave or was somehow damaged. There is no notation to the first card on the second card. The second card did not provide any death information on Elzy. While the first card does indicate his date of death, no place is included.

The cards do provide the same service information. 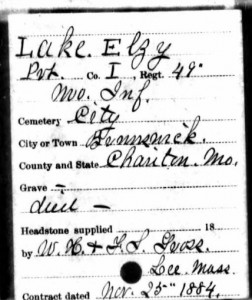 I’m still trying to connect Elzy to other members of the Chariton County Lake family. William Lake served in the same unit as Elzy and their relationship is not known. Since Elzy died during the war, he would not have received a pension, but it is possible he had children or a surviving parent who might have received a pension based upon his service.

A person can appear twice in just about any set of records for a variety of reasons. Keep yourself open to the possibility that there could be more than one reference to the same person in a set of records. Just make certain that if you think it is the same person that you have a solid reason for thinking that is the case.