The drawback to making discoveries is that one wants to follow up on them immediately. I’m trying to avoid that temptation with Frederick and Maria Barbara Siefert, my newly discovered parents of Barbara (Siefert) Bieger Fennan Haase Haase. Diving in before I’ve given some thought to what I know about this couple (and what I don’t know) may cause me to go in circles, search inefficiently, and follow up on matches that are not really matches.

It’s best to take some time and think. 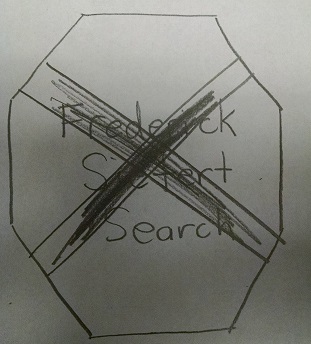 Barbara was born in the vicinity of 1825 in Germany, came to America by 1849 when she married in Cincinnati, Ohio, and died in 1903 in Warsaw, Hancock County, Illinois. Her obituary suggested she came to America with her parents (by using the phrase “came as a young child”), but I have no direct information suggesting that they immigrated. She had her first husband came to Illinois by late 1850.

If Barbara came to the United States as a young girl, I don’t know which parent came with her or if she immigrated with a sibling or other family member.

I need to think about the spelling and handwriting variants for Siefert. It’s been some time since I actively worked on Barbara using her maiden name (most of my recent research on her has focused on her life after she was married). I need to make a list of variants for Siefert and determine which of those variants are Soundex equivalent.

Now that I have names, I need to go back and search for Sieferts in the same general areas where Barbara lived (generally Cincinnati, Ohio, and Hancock County, Illinois) and determine if those individuals could be Frederick or Maria Barbara. It’s possible they lived near Barbara even after she left Ohio.

I also need to review the material I have on Barbara in general as it’s been sometime since I looked at it.  It is possible that a name may have relevance now where it did not before.

I need to determine the church where Barbara was married in 1882 and determine if that church has records. It’s possible that her place of birth is given in the marriage register as that’s not unheard of for German immigrant congregational records during this time period. A quick review of my materials on Barbara indicated I did not have an ecclesiastical copy of their marriage record.

Then, after I’ve looked that material over, I can start thinking about looking for Frederick and Maria Barbara Siefert.