Note: I don’t quite have my views on this “ironed out” yet, but thought it was a worthwhile topic to discuss here. I realize others may have different points of view. Please note that I’m not suggesting hiding things that have happened. In fact, it’s quite the opposite. 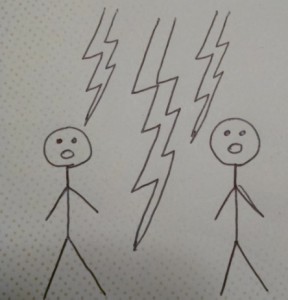 We’ve had a lengthy discussion about “family secrets” on the Facebook page for Genealogy Tip of the Day. Based on that, and the fact that I’m not convinced preserving every detail of a family squabble is necessary, I have decided that when I know that a relationship between two individuals is “strained,” I’ll make a note of that.

“Strain” covers quite a bit of ground.

Preserving every minute detail of a family argument or incident probably isn’t necessary. Preserving what is already publicly available in newspapers or public records is an entirely different matter as that information is already public, even though it may not be common knowledge. Including a blow-by-blow, detailed description of a fight that ensued at a wedding reception or funeral doesn’t necessarily serve any purpose and may not even be entirely accurate.

What I will generally include in my notes is:

I try and avoid preserving undocumented claims. My claim regarding the strain will include a citation.

Cousin Gertrude tells me that there was a fight over her grandfather’s estate on the day of his funeral and Uncle Gerhard and Uncle Tamme came to blows. She then goes into painstaking detail of what was said to whom (including ever vulgar name they called each other, each other’s wife, each other’s children, each other’s livestock, etc.), who was involved in the fight, what was thrown and where it landed, etc. Cousin Gertrude has one overly detailed memory, the desire to be a novelist, or simply too much time on her hands. I may simply say:

Gerhard and his brother Tamme came to blows over their father’s estate at the dinner after the funeral. A physical fight ensued. They never spoke to each other or were in the presence of each other again.

I don’t think I need to record every detail of the fight. Part of this is because cousin Gertrude’s memory may be only partially correct.

I won’t “publish” this “strain” information if either of the individuals are living for a variety of reasons (their privacy and my desire not to aggravate the situation being paramount). My discussion of this strain will not include name calling, fault-finding, assigning blame, imposing my own judgement, etc. If the individuals have children living, I may also choose not to publish the information for similar reasons. If the individuals are my in-laws, I may tread more lightly. Irritating my own relatives is different from irritating my in-laws.

I do think it is important to document the strain in the relationship for others. It may explain certain things that are later discovered in various records and help someone later make better sense of what appears, on the surface, to be confusing.