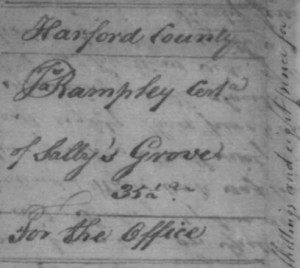 Clues can come from any type of record and can be big brick wall breakers or small pieces of knowledge that give insight into an ancestor without revealing one iota about his or her ancestry. And that’s just fine.

It’s also why a comprehensive search of everything you can get your genealogical hands on is my preferred research approach. Brute force and excessive diligence sometimes accomplishes more than a reasonably exhaustive search. Of course the land patents used in this example are common enough records that they should be utilized in any complete study of a farm owner in late 18th century Maryland.

Harford County, Maryland, resident James Rampley patented several parcels in the late 1700s and early 1800s. Patentees in Maryland usually could name their parcels as a way of identifying them (in addition to their metes and bounds descriptions which indicated the measurements and acreage of the property).

Most of James’s properties had innocent enough titles:

and then there was Sally’s Grove.

My suspicion is that it was named for his wife, Sarah.

While Sally is a well-known diminutive for Sarah, Sarah (Gibson) Rampley is not referred to by that name in any Harford County records. Most of the references to her are in dower releases on land transactions involving James. There she is referred to as Sarah.

While I don’t know for certain that he named this 35 and a half acre parcel for his wife, it does seem reasonable.

Is it evidence that he referred to his wife by Sally instead of Sarah?

That I’m not certain, but it does suggest it.

And it certainly was a better name than Poverty Hills.