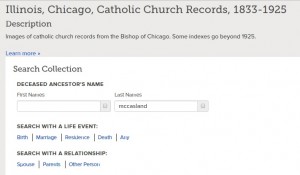 FamilySearch has has digital copies of records of many Chicago, Illinois, Roman Catholic churches online for some time. There is an index. However, it’s clear that the index is not complete.

Searches for various members of the family of William (1888-?) and Mary (Demar/Desmarais) Apgar (1894-1961) failed to locate any references. The Apgars were not married in the church, but it was believed (based upon family tradition–which is always problematic) that their children were baptized in their youth.

A manual search of FamilySearch‘s digital images of the records of the former Holy Rosary Church (351 East 113th Street, Chicago, Illinois) found the entries for the children of William and Mary (Demar/Desmarais) Apgar who were all baptized on 13 April 1922:

The children ranged in age from thirteen to six at the time of their baptism. The priest made a note that the non-Catholic father did not live with the family and that the mother was a non-practicing Catholic.

A transcription of the baptism of Anna Apgar, obtained nearly twenty years ago, rendered the name of the godmother as Esther McCasland. It was believe that this was an incorrect transcription on the part of the former parish secretary.

That’s not the case. 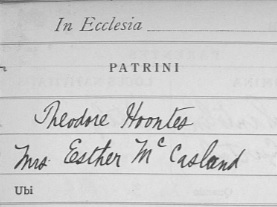 Lingering questions remain as to why Theodore Hoontes was a sponsor. His relationship to the family is known. However,  he was living in Clinton County, New York, at the time of the baptism and apparently never lived in Chicago and was not present at the baptism (which was originally conjectured when only the incomplete transcription was available–the actual record makes it clear Hoontes was not in attendance). The Greek native was living in Clinton County, New York and was married to another sister of Mary (Demar/Desmarais) Apgar.  It is not known if Hoontes was a practicing Catholic or not.

Mary Apgar appears in the church records later in 1922–when she marries her second husband.