At the sale of his father in 1823 in Tuscarawas Township, Coshocton County, Ohio, James Rampley purchased a “flower tub.” 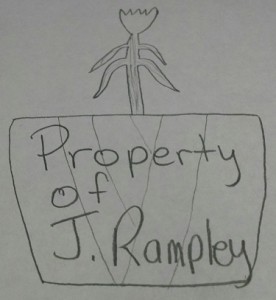 $.25. We won’t even compare that to a modern value as that’s really difficult to do for something purchased nearly two hundred years ago. Determining the time value of money is problematic over that length of time and the value of any item is largely determined by the rarity of that item in the location, how useful the item was, and how useful the item was.

And, since this was an estate auction two bidders can easily inflate the price of an item beyond it’s actual fair market value.

It wasn’t the only item James Rampley bought at the sale of Thomas J. Rampley. The date of the sale is not recorded in the will book in which the accounting is recorded. However, the administrator of Thomas’ estate was appointed on 7 August 1823 (Coshocton County Will Record 1, page 376-377) and the sale account was recorded in the same book on page 402, so it’s likely the sale was in 1823 after the appointment.

The handwriting in the list of items James Rampley purchased is clear. The intent is “flower tub.” 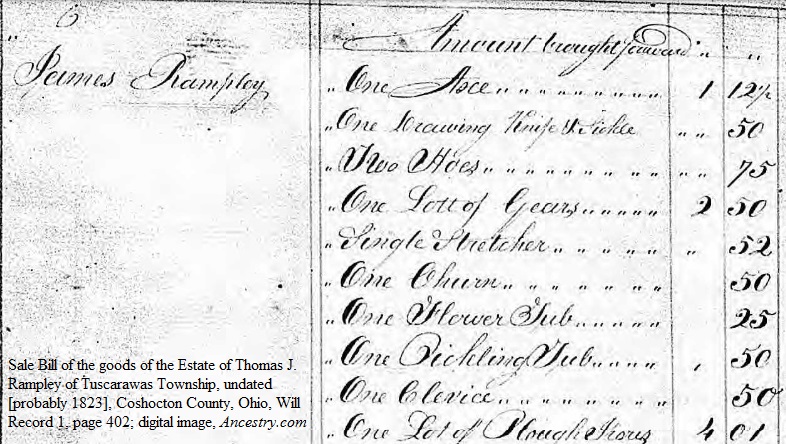 However it’s doubtful that a large flower pot is what James purchased.

The intent is most likely flour tub. The other tub purchased by James was a pickling tub (listed right after the “flower tub”). The item listed before the “flower tub” is a churn. The grouping of these items makes one wonder if the sold household type items (or things involved in food preservation) at the same time which resulted in them being grouped together in the list of items James purchased.

The handwriting in the estate inventory is the same as that in the “Sale Bill.” That does not mean the original inventory and Sale Bill were written by the same person. What I’m using are digital images of the record books (from Ancestry.com in their “Ohio, Wills and Probate Records, 1786-1998“) and those entries in the record book were written by the same clerk who copied them from the original inventory and sale bill.

To complete my citation to the item, I needed the volume number for the book in which these entries appeared. That required me to maneuver the front of the set of images as Ancestry.com often created their own titles for probate records based upon what items were on one physical role of microfilm. Basically Ancestry.com made a “title” for each roll of microfilm.

I prefer to use the actual record volume number and not the more generic titles created by Ancestry.com which often lump several volumes together. 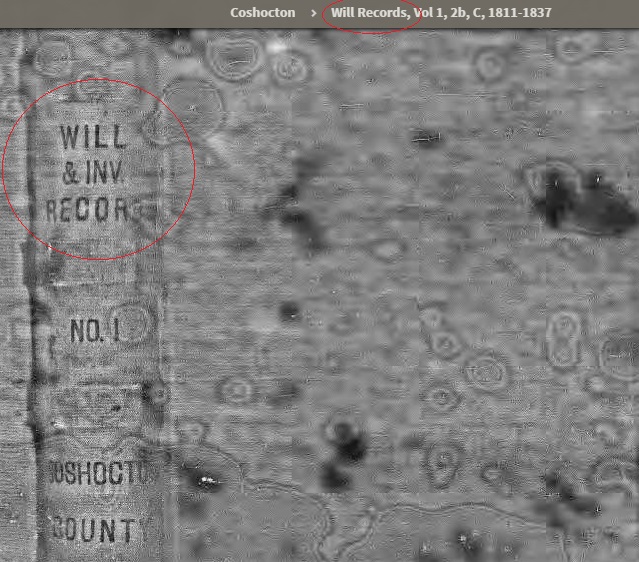 Which means that the image I originally posted needs to be corrected. 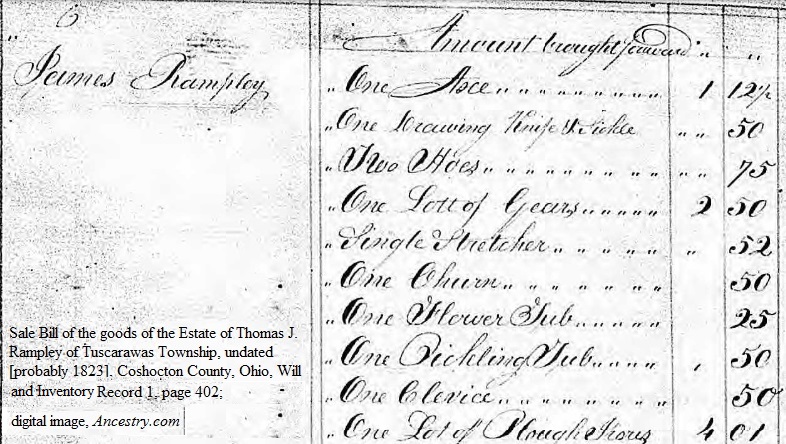 James Rampley was a farmer and a cooper. He would have been twenty years old at the time these purchases were made.