Sometimes whether or not I obtain everything I can on an ancestor depends upon the situation. 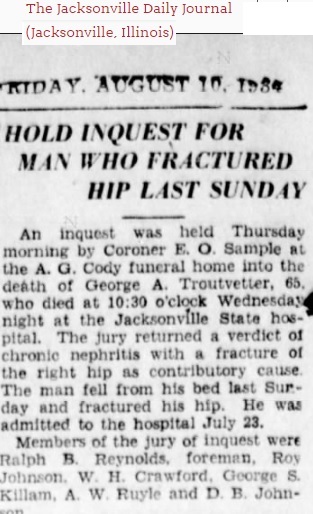 taining the information with the likelihood I will uncover something new. In some research situations, I get everything I can–which means everything. Other times the exhaustive search suggested by professional genealogists is adequate.

But it really boils down to how much the record is likely to tell me. In this case I’m not certain it will be all that helpful.

George A. Trautvetter died in a state hospital in Jacksonville, Illinois, in 1934. A newspaper account from the 10 August 1934 Jacksonville Daily Democrat indicated that an inquest was held into his death and it was determined that chronic nephritis was the immediate cause of death with a fractured hip (resulting from a fall) being a contributory cause.

Is it worth it to get a copy of the inquest record?

George’s life is fairly well-documented already. His parents, wife, and children are all known. He was not in the hospital very long before he died, perhaps a few weeks. George had suffered several strokes in the last couple of years of his life and was cared for by his wife and children at home for as long as possible (including his daughter who was my grandmother). His death at the state hospital was kept out of his obituary and my grandmother always insisted he “died at home” on the family farm near Loraine, Adams County, Illinois.

While there was an inquest, the newspaper account makes his death seem fairly normal and does not suggest that there was anything unusual about it.

At this point, I’m not certain I’ll obtain the records of the inquest.

However admissions to the state hospital usually required action by the county court in the county where the resident lived. There may be records of his committal at the Adams County Courthouse.

Those records may be more interesting than the inquest records.

This newspaper item was located on Newspapers.com.