I gave into temptation and downloaded the “We’re Related” app from Ancestry.com. Originally I was not even going to download it, but went ahead in the interest of keeping on top of what’s going on in the online genealogy world.

I had no interest in which “famous” person to whom I am related, but I was slightly interested to see if I was distantly related to any of my genealogy colleagues on Facebook.

As soon as I realized how the app was working, I had even less 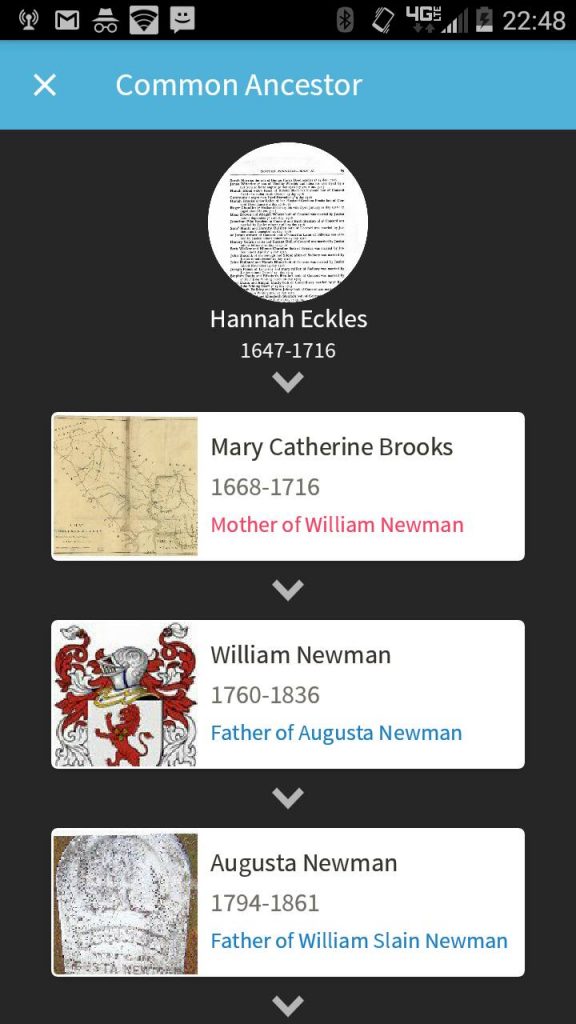 My lineage for Augusta Newman does not extend beyond his father. My tree goes back as far as the William Newman shown in this image. Some have put forth fathers and mothers for William, but so far I have not determined for myself who his father likely is. I certainly do not think his mother is a woman who died in 1716.

To repeat: the app did not change any of the names or information in my actual tree on the Ancestry.com website, but the names did appear in my “lineage” as shown on the cellphone app even though they aren’t in my actual online tree.

And just one more time: no.

I don’t have some information in my tree at Ancestry.com for a reason: I haven’t proven it adequately yet or it simply is entirely incorrect.

If the app had chosen to only use ancestors for me as they appear in the actual tree I have created, that would be fine. But as it stands now, I have to review the app’s lineage and compare it with the lineage I have in my database and throw out the ones that I’ve probably already thrown out countless times before.

That’s not something I should have to do.

Your mileage may vary.

Also the app so far has taken nearly two days to try and find relatives in one of my databases and is still “spinning” on that database.

The “famous relative” finder located a possible relationship to President Obama. It failed to pull up President Truman as a descendant of the same person. Oops.