Genealogists who have used Family History Library microfilm known that it is not unusual for items to be on a roll of microfilm that do not appear in the catalog entry for that film. Sometimes microfilmers film an unusual small book or a few pieces of paper that really don’t “fit” with the other records. Sometimes catalogers simply miss these items, especially if there are only a few pages. Sometimes catalogers don’t quite know how to catalog them and simply move on to the next item.

And sometimes users discover things on microfilm because they didn’t read the catalog description completely.

When Ancestry.com indexes digital images that it has made from Family History Library microfilm, they sometimes index only part of what has been digitized. That appears to have been the case with Ancestry.com‘s “Germany, Lutheran Baptisms, Marriages, and Burials, 1519-1969.”

That appears to have been the case with the confirmations from Wiesens, Ostfriesland, Germany in 1841. Two of my 3rd great-grandfathers (Johann Christophers Janssen and Hinrich Jacobs Fecht) appear in that list. 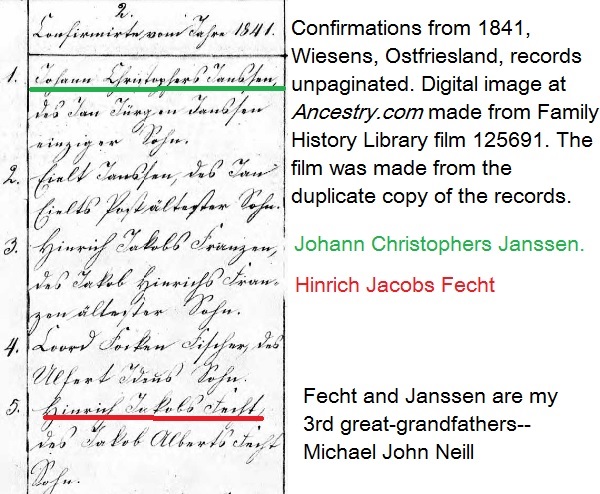 How many villages have confirmation records included in this database is unknown. Users will have to browse the images for the desired location to determine if additional materials other than baptismal, marriage, and burial appear in the records. The card catalog entry for the roll of film from which the digital image of these was created, does not indicate that confirmations appear as well.

Why bother with these records?

Some may think that the confirmation records are not helpful and only repeat information that is in the baptismal and marriage records. Yes, that’s true. However, in an area such as Ostfriesland where patronymics were unofficially practiced until the mid-19th century in some families, an additional reference to a child with his or her last name is helpful.