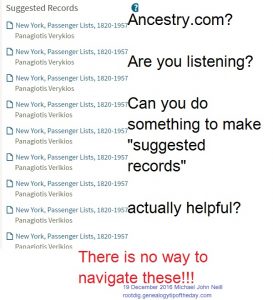 The potential for help is also why I wished Ancestry.com gave more details on the “Suggested Records.”

I’ve not worked on Panagiotis Verikios in a while and it is possible that one of these hits contains something on him that I have not already discovered (especially since the Panagiotis Verikios in which I’m interested in is known to have made at least one return trip to Greece).  Some of the references are to other known individuals with the same name who may or may not be related to the Panagiotis for whom I am searching ( that person is a man named Panagiotis/Peter Spirios/Samuel Verikios, born 1 January 1883 either in Saunta Maura, Lefkada or “Kato Exanthia” Greece[possibly a reference to just Exanthia], and lived in Chicago, Illinois, from the early 1900s until his death in the 1940s).

This is one time when I would like to know a little more about the “Suggested Records” or be able to mark them as “already seen” so that I’m not left wondering if there is a reference that I have overlooked.

Here’s what would be helpful: