On the surface it may seem advantageous to research an item that appears in more than one newspaper at the same time. It is and it isn’t. The drawback to national or regional coverage of an item is that much of that coverage is repetitive in nature, particu

larly if a story is picked up by a wire service and used by numerous newspapers. The vast majority of articles will contain the same details.  And we’ve discussed before, details are no more likely to be correct just because they are repeated multiple times.

And there is the question of how much time should be spent looking for these items when they are likely simply repeating each other? For some stories reading the same item over and over is not an efficient use of time and resources.

Of course there’s always the chance I miss something by not looking in all those other papers.  The reference in the Rockford, Illinois Morning Sun, as shown in this post was a summary of what appeared i 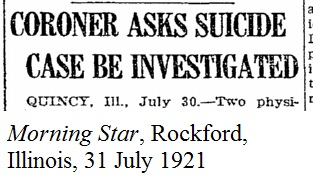 n the Quincy, Illinois, newspaper at about the same time. The chance that I miss something is small enough that I’m willing to risk it. After all, there is only so much time.

Note: the Rockford, Illinois item was obtained on GenealogyBank.com.