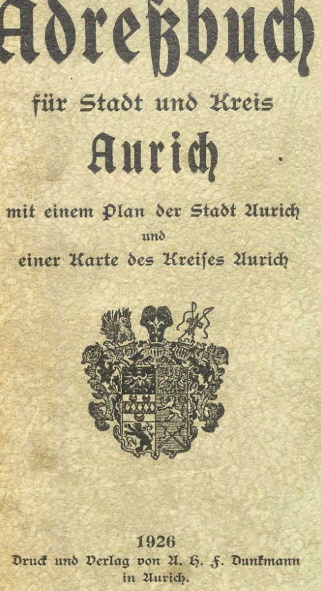 Ancestry.com recently indicated that “Germany and Surrounding Areas, Address Books, 1829-1974” is a new or updated database. In taking a look at this image database (which appears to be heavily concentrated in late 19th and early 20th century materials), I made a nice little discovery: A 1926 directory for Aurich in Ostfriesland.

As the title page indicates it does not just include the city of Aurich.  My own families had left Ostfriesland by this time, but there were references to cousins who were living in the area at the time. The directory is a part of the larger “Germany and Surrounding Areas, Address Books, 1829-1974“database. I found it easier to browse the directory (which lists individuals alphabetically by name of town) than in searching it. There is some historical and demographic information in the introduction of the book–for those who read German. However some of the tables and charts can easily be read by those who know little German.

The database can be searched for just this directory by entering “Aurich, Lower Saxony, Germany” in the “Lived in” box when querying the “Germany and Surrounding Areas, Address Books, 1829-1974“database.

I even discovered a few of my Goldenstein family members still living in Wrisse in 1926.