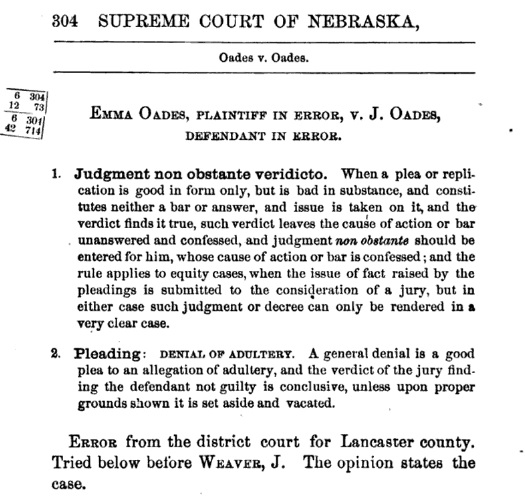 Reading legal documents can be difficult for some  genealogists who are not lawyers. They can occasionally be difficult to read for genealogists who are lawyers–especially if the documents are beyond a certain age. Reading information from appeals of court cases can be even more difficult as the appeal focuses on the technical reasons for the appeal and often does not include all the minute details of testimony that one finds in some court cases. With the digitization of many “reporters” summarizing decisions made by appellate courts, it is easier to find these materials than it was several years ago.

That does not relieve the user of understanding and interpreting the information correctly if it is going to be used in further research or as evidence in a research argument. The problem is: “how much of the legal maneuvering does the genealogist have to really understand?” Does one have to become a legal scholar and understand all the details of the case and any appeals?

It really depends on the case. I am hesitant to say that one has to have a detailed understanding of all the minutia involved in any appeal. It may be sufficient to know if the appeal was approved or denied and what the reason for that was, particularly if it involves the interpretation of any factual evidence involved in the case. Understanding procedural errors may not add much to the understanding of the individuals involved in the court case. It may not be necessary to understand every detail of the arguments put forth by both sides in the appeal or the details of the specific cases they cited in their argument and why those arguments were cited.

But the researcher will not know what’s relevant to their problem if they don’t muddle their way through the information. And it may take more than one time to do that.

Sometimes it can be difficult determining what the “real reason” was a court case was appealed. That’s because the “real reason” may not be the legal reason on which the appeal was based. And the real reason may not even be stated in the records or summary of the appeal. If a spouse appeals the amount of alimony the other spouse was awarded, a technical reason will usually be used. “I’m not giving them that much because I think they are a total (@#*$&” is not a legal justification.

The Supreme Court of Nebraska issued a ruling in October of 1877 regarding a divorce decree that was contested by Emma Oades. She was not really contesting the divorce. She was contesting some details of that divorce, particularly one detail on which the divorce was based.

In a future post, we’ll see what that detail was and why it mattered so much to Emma Oades. I would have missed an interesting lesson if I had ignored the appeal of her divorce as legal maneuvering.