I suppose admitting mistakes is bad genealogical form for someone who writes and speaks on genealogy, but we are going to go ahead and do it anyway.

I realized I had a typographical error in my ancestor table and decided to fix it. I had the wrong year of birth for Clark Sargent in Vermont and it probably stemmed from how I compiled the copy of my ancestor table which I’ve posted on my blog for some time. To make certain I had the correct date, I decided to so a little searching for the record of Clark’s birth

It was then that I realized that Clark Sargent’s 1806 birth in Vermont is recorded in two “towns:” Addison and Leicester. That’s what it says on the bottom of both cards from “Vermont Births, Marriages and Deaths to 2008,”  which appears on the AmericanAncestors website: towns. 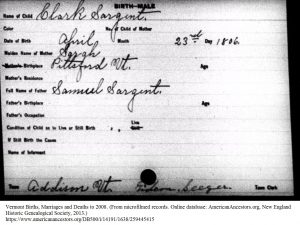 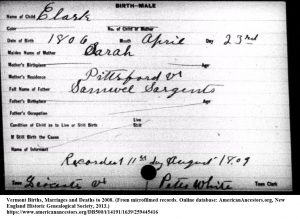 The towns of Addison and Leicester are approximately twenty-five miles apart. That seems a little suspect for a duplicate registration and then I realized that Addison was also a county in Vermont as well. It could be that the card listing Addison as the “town” of birth was actually a reference to the county of Addison. Leicester is in Addison County. That would make the geographical references make a little more sense.

Of course, I need to determine if that’s actually the case. Just because my conjecture seems reasonable does not mean that it is correct. I also need to find out how common it was to have duplicate entries in the records of birth for this era.

At least the date of birth and names of parents are the same on both entries. Pittsford, Vermont is referred to as the mother’s residence on the Leicester card and it is on the line for “Mother’s Birthplace” (with “Mother’s” crossed out) on the Addison card.  At least the location is consistent. This indicates to me that I need to see the actual card.

And all because I discovered a typographical error.