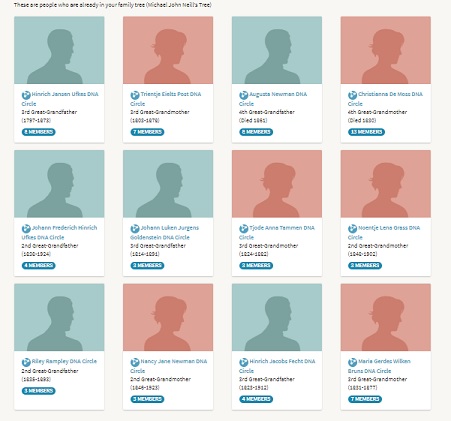 Now I’m up to twelve circles at  AncestryDNA, Two circles are new and the numbers for one circle have changed since I last reviewed them. My current circles are:

The DNA circles at  AncestryDNA are still in flux. There’s a chance I’ll be put in more as time moves on. My online tree there is as complete as I have it at this point. My maternal lines are more complete than my paternal ones which explains why my circles are concentrated on those families.

There are three more members in the circle for Maria (Bruns) Fecht than there are for her husband Hinrich. Many of us in those circles are at least third great-grandchildren of this couple. Because of the generational distance it is not surprising that some members of Hinrich’s circle are not in Maria’s and vice versa. As we have mentioned in earlier posts, as the number of generations increases the probability that one has DNA from that ancestor deceases. The three members of Hinrich’s circle that are not in Maria’s are all descendants of one daughter of Hinrich and Maria–so it’s possible that some of Maria’s DNA did not get passed down to current generations of that family (in fact the three matches are one third great-granddaughter of Maria and two of that descendant’s children).  I’ll be interested in their circles as Hinrich did have one child with his first wife and that child does have living descendants.

Hinrich’s first wife (Trientje Bruns) was a sister to his second wife, Maria.

Since the DNA circles at AncestryDNA are based upon submitted pedigrees and DNA hopefully there aren’t mixups in the circles for Maria and her sister Trientje.

Remember that you will not be a DNA match to everyone in the DNA circle for an ancestor.

I did the DNA test to answer questions on my paternal lines–but sifting out the maternal matches helps me concentrate on the others.

But I’m still wishing they had a chromosome browser.