For me they are out there–double and triple cousins.

Some people have to go back to ten or more generations to find individuals to whom they are related in more than one way. Some of us do not. I’ve discovered another individual to whom I am related in three documentable ways. This person has also performed a DNA test at Ancestry.com.  The image in this post was partially created from his partial online tree. 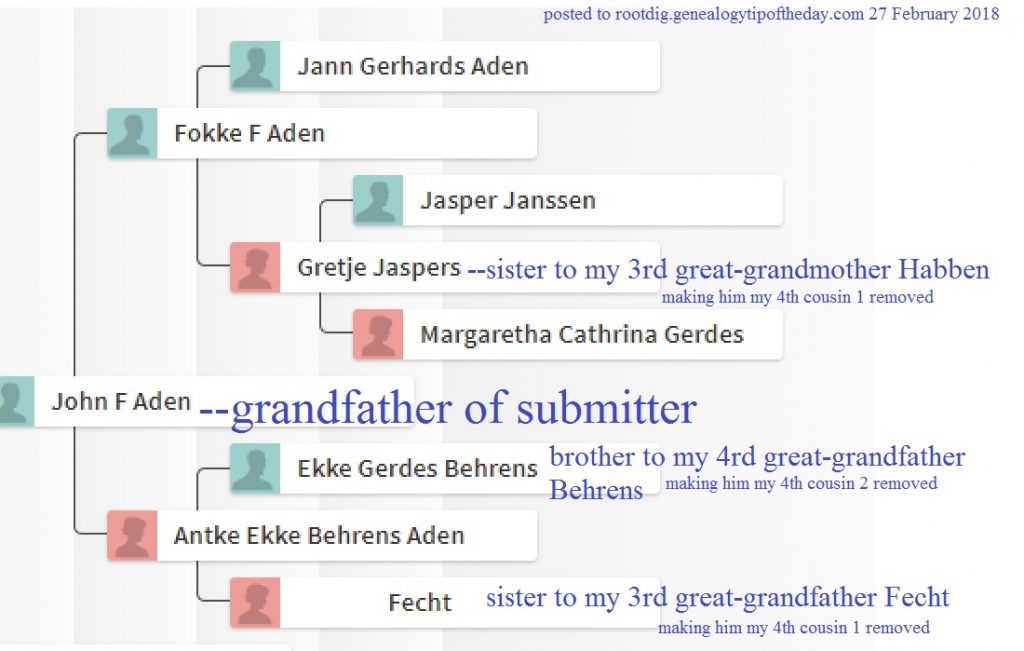 His grandfather was a man named John F. Aden. Based upon the submitter’s tree and what I know about mine, we are related in three ways:

While none of our relationships are as close as first cousins, they are all within a range that can be detected by the autosomal test at  AncestryDNA (the word “can” was used intentionally in that sentence–see “Cousin statistics” below). It is important to remember that the predicted amount of shared DNA between a certain cousinship is just that: a prediction.  It is subject to variation.

According to AncestryDNA, we share 15.2 centimorgans across 2 segments. That may be less than expected.

I don’t have exact answers. DNA does not split equally and Bettinger’s numbers are averages obtained from samples. Another factor worth considering is that these three shared lines are not “spread equally” in the family tree of the DNA submitter or me. For the DNA submitter their shared DNA with me is all channeled through one grandfather (and relatively evenly spread through three of that grandfather’s grandparents). For me, that shared ancestry has been passed differently. My third great-grandparents listed two grandparents of my great-grandpa Habben. The other ancestor of mine listed is a great-grandparent of my great-grandma Ufkes.

As usual, your paper tree helps sorting your results.

This DNA submitter and I have 15.2 shared centimorgans across two segments.  In my background, I never want to assume that because I have found one connection that I am done.

Doubling or tripling the number of connections in the paper pedigree does not double or triple the amount of shared DNA.