Since I’ve been playing with the “Social Security Applications and Claims Index, 1936-2007″ at Ancestry.com, I’ve been thinking about citing various databases and records created from Social Security Administration records. All citations are created in the spirit of Evidence Explained. The first post in our “Citing Social Security Items” will focus on the SS-5 form.

It seems fairly straightforward to cite an SS-5 form such as the one for Anna Margaret Lake shown in this post. The “first reference note” for this form should be:

That’s pretty much how the form is cited in Evidence Explained—I did use the form title as on the actual form. It’s possible that the form has cha 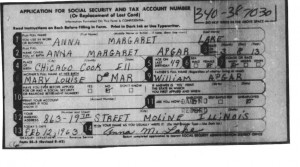 nged slightly over time. My personal style preference going forward is to abbreviate minimally so I’ve written out “Social Security” instead of abbreviating. The key is consistency.

In a future post, we’ll look at an SS-5 form from the 1940s and databases created from Social Security Administration data.

Note: For more about citation theory and research methodology, consider adding in Evidence Explained to your own personal research library or subscribing to Casefile Clues.