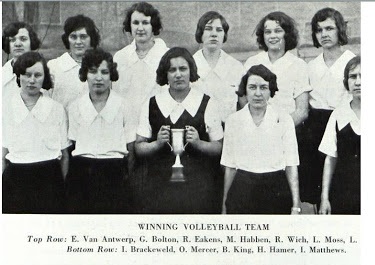 This image comes from the 1930 Western Illinois University Sequel, page 132. This is the volleyball team.
In the back, 4th from the left is “M. Habben.”
I’m reasonably certain it’s Margaret (Habben) Hutchison (1910 Prairie Township, Hancock County, Illinois–1990 Quincy, Adams County, Illinois). Margaret (actually Anna Margaret) was a daughter of Mimke and Tjode (Goldenstein) Habben and met and married her husband Robert Hutchison while in the Women’s Army Corps during World War II. They lived near Nauvoo, Illinois, after the war and she lived in Carthage after his death and before she moved to the Illinois Veteran’s Home in Quincy.
I know nothing about the other individuals pictured in the photograph. I had no idea Aunt Margaret was on the volleyball team until this picture was located.
This item is housed on the CARLI Digital Collections page at http://collections.carli.illinois.edu.