It always goes without saying that the entire image should be referenced.

As a reminder, the “household” that Ancestry.com includes in their 1870 census transcription does not always include everyone in the household. Speculation about who is left out is meaningless–the actual census should be read. That’s true even when one is “in a hurry” and doesn’t think the complete image will “tell you anything else.”

First of all, there’s never really a hurry when doing genealogical research in 1870. The people are all dead.

This 1870 census enumeration for the family of William Chaney in Southampton Township, Bedford County, Pennsylvania contains Chaney and his wife Melinda (both 49 years of age) and a nine-year old who was “apprenticed to farmer,” John Hymes. Hymes could have a relationship to the Chaneys. I simply don’t know at this point. He does not appear to be related to Chaney (based upon the married names of Chaney’s known sisters), but it is still possible John is Chaney’s relative. It’s also possible that John is related to Malinda Chaney as her family of origin is unknown.

I have no idea why Ancestry.com is displaying “altered” households for some 1870 households. Maybe it is to serve as a reminder to look at the actual record–but I doubt it. 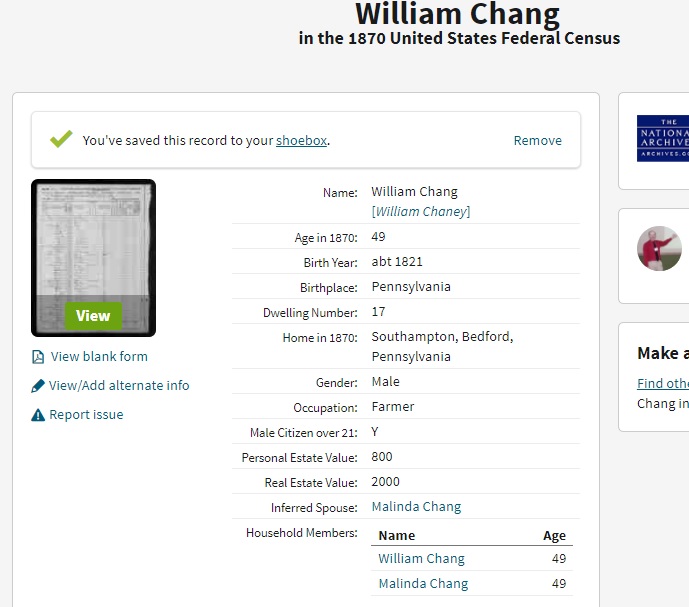 Just another one of those idiosyncrasies to add to the list.