Before we proceed any further, it is worth noting that for much of American history mostly men naturalized and before 1906, most naturalizations took place in some type of county court. There are exceptions, but generally women did not naturalize (especially when they could not vote anyway) and for much of American history their citizenship status was derived from that of their husband or their father (more information).

For a time those who immigrated as minors (those under the age of majority, which was usually twenty-one years for a male) were subject to a slightly different naturalization procedure. From 1824 to 1906, minor aliens who had lived in the United States for five years before their twenty-third birthday could file both their declarations of intent to become citizens and actual petitions to become citizens at the same time. Individuals who had immigrated after their twenty-first birthday were not given this option.

These declarations and the resulting naturalizations may be filed in a separate series of records from the other naturalizations (although all these records are probably in the same records office and may be within very close proximity to each other).

It is worth noting that records of minors’ naturalizations may be kept separately from naturalizations of those who immigrated as adults. The genealogist should always make certain that all records have been searched. In some cases these records may be squeezed in with other naturalization records.

To the uninitiated, the book containing Jann Huls’ minor naturalization is confusing. The spine says Naturalization Record, but the book actually contains declarations of intent for those who immigrated as adults and in the back it contains the naturalization Petition, Final Oath and Certificate for minors. Had I only scanned the first hundred pages of the book, I would have missed these records in the back portion of the book.

An additional hint: Always read the very small print at the top of a printed document to see if it indicates what kind of document you are looking at. Those words are not usually put there for decoration.

What Does This Document Say?
This record still provides information. However because of the nature of the document and the age of the immigrant, there are a few additional details that can help us pin down some dates. This information is not usually given on naturalization records for those who immigrated as adults.

Pertinent portions of the document are summarized here.

So, based upon various statements in the document, I know Jann was born between 1852 and 1867.

Jann Huls met Johann Huls and Jann Albers Fecht at least by 1883, possibly before. In this case, both witnesses have non-English names and the individuals might have either known Jann before his immigration or at least been members of the same immigrant community.

Off to Passenger Lists?

Not yet. In reality, searching for Jann’s entry on a passenger manifest should not be done until additional records in the United States have been searched and more information about his family has been located. Even with the indexes that genealogists now have, searching passenger lists is more effectively done when additional information is known. Our previous analysis of the naturalization documents was done partially as an exercise to determine what the record did (and did not) indicate. A common mistake made by some family historians is to search passenger lists too early, before adequate information is known about the immigrant.
In this case, the naturalization does not provide a great deal of data on Jann (typical of records for this era). Jann’s marriage records, obituary, death certificate, and census information provide additional detail on his life and should be acquired and studied. (Next week, we’ll see how Jann was located on a passenger list; it was not an easy trick to find him.)

What Do I Know?
In brief, Jann was born in 1866 in Germany and died in Hancock County, Illinois, in 1942. His parents were Johann and Meta Huls. The Johann Huls who was a character witness on the naturalization was Jann’s half-brother and the witness Jann Albers Fecht was Jann Hulsâ€˜ step-father. Additional records provided names of Jann’s siblings which were helpful when searching the passenger lists. Jann was married three times, with the first marriage being within three days of his 1888 naturalization.

Jann’s 1900-1930 census enumerations are fairly consistent with each other and what is already known about his immigration and naturalization.

The years of immigration listed run a range from 1868-1871, a fairly narrow time period. One should not expect these years to be completely consistent from one census enumeration to another. His year of naturalization from 1920 is only off by two years. As for his “unknown” naturalization status in 1930, there is a reasonable chance that Jann’s wife answered the questions of the census taker in 1930. Jann married this wife in the 1920s and it is reasonably likely that she might have been uncertain about some details of his life before their marriage. 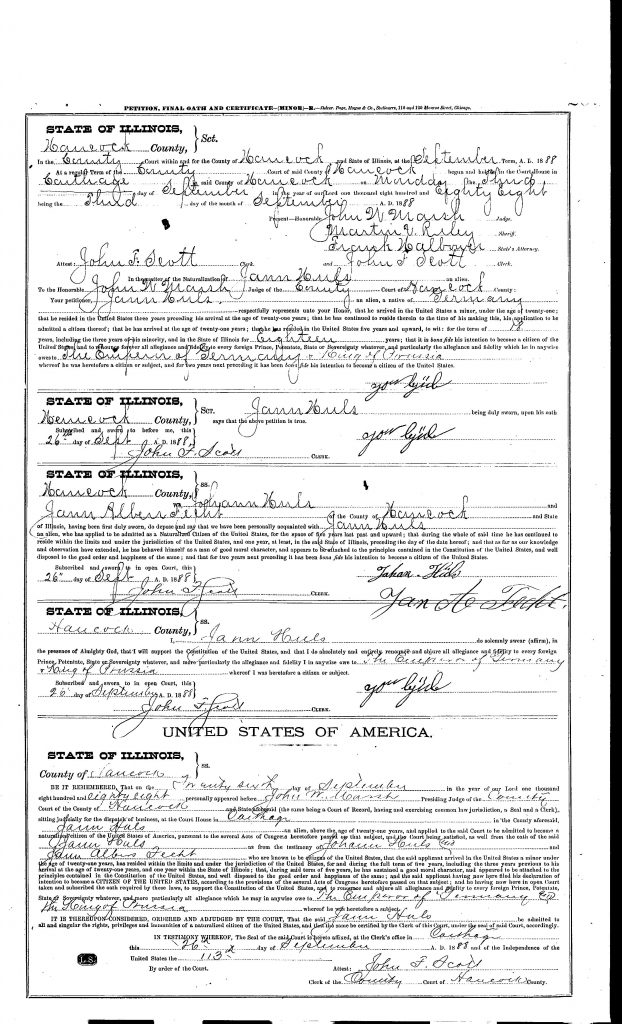