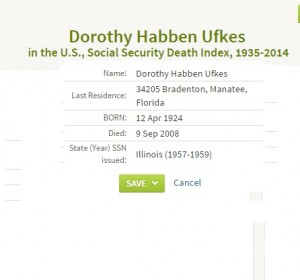 There was only one Dorothy Habben Ufkes who died in 2008 so there’s no real difficulty identifying this entry. There aren’t many Dorothy Ufkeses in the Social Security Death Index period, but that’s really not the point. For some names the year of death along with the individual’s name may not be sufficient to distinguish one individual from another in the database. My citations for individuals in the “Social Security Death Index” without Social Security Numbers need to be detailed enough to make it clear to which individual I am referring. I also want to have a format that I can use consistently so that I’m not mixing up how I cite individuals from this database.

So I’ve decided to go with the following format:

For some individuals I may not have a complete birth date or death date, but what birth and death date information is given should make it clear to someone else the individual to which I am referring.