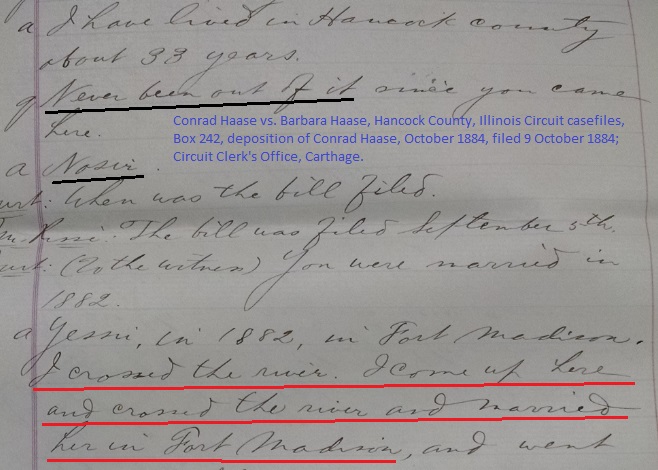 Conrad Haase stated in October of 1884 in open court that he had lived in Hancock County for thirty-three years and had never been out of the county “since he came here.”

A few moments after making that statement, he said “I crossed the river and married her in Ft. Madison.”

The judge was asking Haase questions and I’m not clear why he didn’t follow up on the statement Haase made about his residence since he did as Haase to clarify other statements.

What I think Haase meant was that he had not left the general area of Hancock County since his arrival. While Ft. Madison is not in Hancock County, it’s not as if Haase traveled hundreds of miles. I’m inclined to think that Haase’s statement about his residence is essentially true even if it’s not literally true.

Inconsistencies in a document should be noted–even if the reason for the discrepancy cannot be determined.

Even if that statement is made in open court.

Unfortunately some of our ancestors crossed the river and ended up mentioning it in court.