There is really only one guy I’d like to find in the “Social Security Applications and Claims Index, 1936-2007″ database at Ancestry.com: William Frame Apgar. 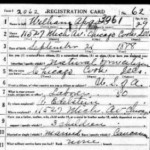 A few readers privately ask “how hard is it to search for someone in this database?”It’s easier when you “know everything” about a person and have quiet a few details about their lives. It’s more difficult when:

For these reasons, before I search anymore for William it is probably advised to revisit what I know about him.  This is an important part of the genealogical problem solving process, which in a nutshell is:

So what I know about William Frame Apgar:

He was the son of English natives Thomas and Elizabeth (Watson) Frame. For a time before his teens he may have lived with a family with the last name of Apgar. Why this happened I am not certain. He marries his wife under the name William Frame Apgar, but is enumerated in 1910 as William Frame. His wife uses the last name of Apgar when she divorces him in the early 1920s. William could not be located during the divorce proceedings and was no heard of after that point.

The following records have been located on William:

It’s not bad to review the information I already have in order to determine if the records are likely for the same person or not.

I am not entirely certain of the year William was born. He may have been listed as Either William Apgar, William Frame, or William Frame Apgar. He may have listed his Frame parents in the “Social Security Applications and Claims Index, 1936-2007″ or he may not have (there are some entries without parents).

Searches will have to be conducted in a variety of ways when I’m searching for him in the “Social Security Applications and Claims Index, 1936-2007″ database. Completely every box in the search interface is not the appropriate procedure.

And it is completely possible that William simply is not in the index. Since I don’t know anything about him after 1920 or so it’s possible that he died before Social Security was even started.