The obituary of my great-grandmother’s sister indicated that she died in a Keokuk, Iowa, hospital in December of 1927.

Wanting to view her death certificate, I decided to search “Iowa, Death Records, 1904-1951” at FamilySearch.  A few quick searches turned up no entry for Ella Shipe or any reasonable facsimile of her name. Since I had the date of death, browsing seemed like my best option. Browsing the images from which this index was created is possible. 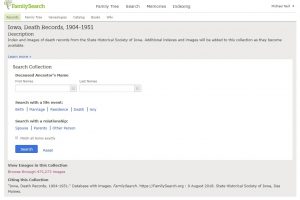 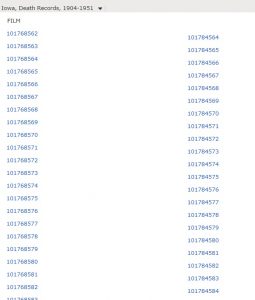 However when attempting to do that I was directed to a page of film numbers. That was not going to work as I did not intend to look at each roll of film. Fortunately that was not necessary. I could search the card catalog to see what records they had.

I had to remember that even though this death was in Lee County, Iowa, that the records used for this index were state copies of the record. The catalog would have to be searched for vital records recorded at the state level–not the county level. The FamilySearch catalog was searched for “United States, Iowa” and I scrolled down to the section of the catalog for:

That explained why my aunt was not found–I thought.

Looking at the list of certificates classified under the subject “Iowa, death certificates, 1904-1958,” I originally saw:

The time frame did not cover the 1927 death date I had for my aunt. I thought I had my answer. I didn’t. Using the “find” feature in my browser, I found another set of records for Lee County much further down the list of records in the “Iowa, death certificates, 1904-1958” heading:

Those records are available digitally and when browsed, I did not find the certificate of interest. The search was conducted for two months after her death, just in case there was a delay in recording the item. I did not that there were other certificates for the hospital in which her obituary indicated she died.

I still don’t have my great-aunt’s death certificate. It could be that her obituary had the wrong place of death. I should also check the county records of deaths in case for some reason her certificate was not forwarded to the state.