Bureau of Land Management Cash Sale files are known for there dearth of information. Because of that, I typically don’t request copies of these files for people who are relatively well-documented. Cash land files typically only include a few receipts and information on issuing the patent once final payment has been made.

The only reason I requested the cash sale file for George E. Troutfetter in Thomas County, Kansas, was because the property was within a few miles of a homestead his father, Christian Troutfetter, received. I did not expect the file to tell me anything.

Then I received it.

George E. Troutfetter made out a statement that he was a native-born citizen of the United States and was born in Warsaw, Hancock [County], Illinois. He doesn’t state his age–only that he is of legal age.

I’m not entirely certain why George had to make out this statement. It might have been because his parents were German natives, but I have no real idea if that is the case or not. To be perfectly honest, none of my immigrant ancestors made federal land purchases, so I don’t have an item with which to compare it. However, I do know that homesteaders had to prove citizenship and it may have been the case with federal land purchases as well. This is a case of where until one encounters the problem one does not always give it much thought.

Despite the reason, his statement makes the point that one never really knows what one will find in a file until one receives it. I knew George was a native born citizen before I ever obtained this file.

George’s age is not mentioned because all that mattered was that he was of legal age.

We are still working on the copy of his father’s nearby homestead application. 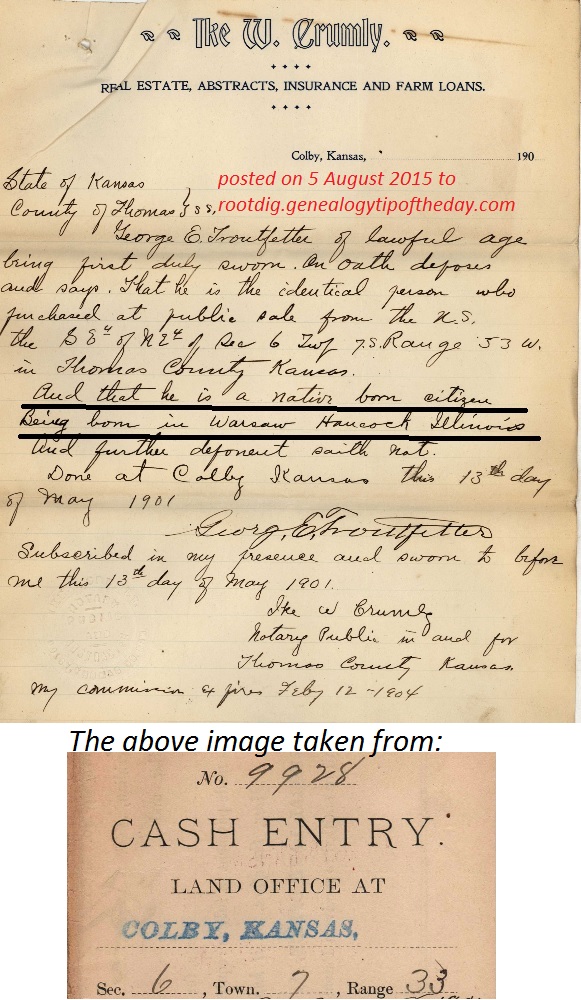