There’s a search lesson in this newspaper article that has absolutely nothing to do with Goldenstein’s 1921 death in a hotel in Kansas City. While his first name is mentioned in the article, the text is apparently so faint that searches for “Henry Goldenstein” did not locate this item from 17 July 1921. This item was located by conducting searches without using the first name of Henry.

And there’s details in the article that were not mentioned in other newspaper accounts of the incident.

The newspaper declined to name the woman in the story. Stay tuned. 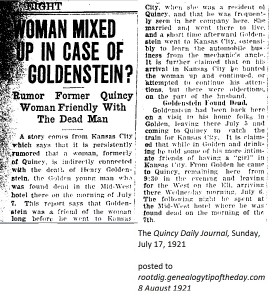 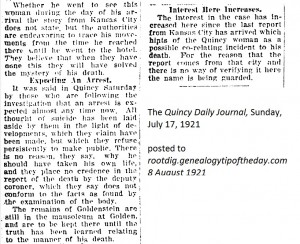