Working with the DNA of the relatives the researcher “knows all about” can increase their analytical skills so they are better able to work with the families about which they know less.

After connecting on FamilyTreeDNA, I located a descendant (called LR for this discussion) of my 5th great-grandfather, Harm Oltmans Roben (died in 1819) with whom I share 29.2 centimorgans of DNA over one segment. This amount of shared DNA is consistent with our paper genealogical relationship.

Her kit has also been posted to GedMatch (referred to as T67 in this discussion). I decided to see if there were any shared matches that stuck out at me.

There were none. But when I looked at the matches we shared and the matches that we did not share, I was reminded of a key point in genealogical analysis of DNA data. 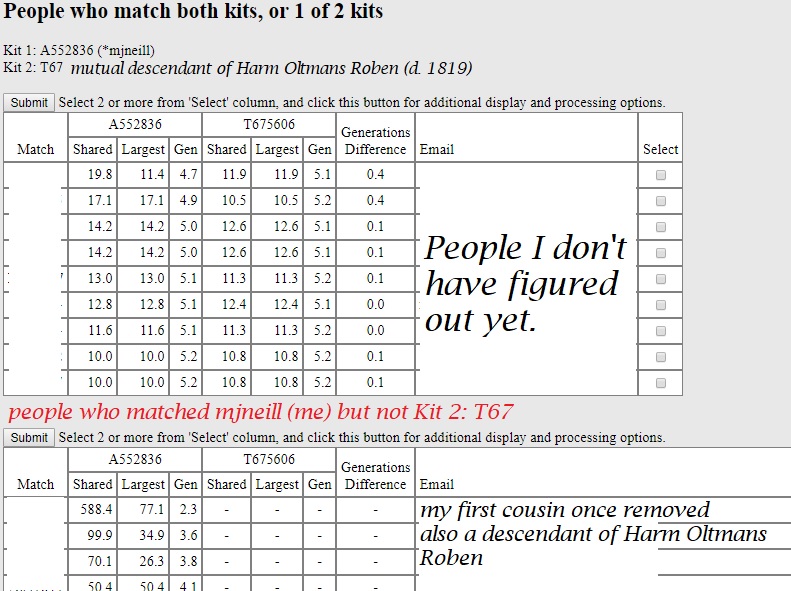 One of the matches that we do not share is one with whom I share 588.4 cM of DNA. This person is my first cousin once removed (my great-grandparents are his grandparents). He’s also a descendant of Harm Oltmans Roben as our shared male ancestor is a great-great-grandson of Harm.

Had I not known how LR was related to me, I might have been tempted to think that she was related to me in some way other than through this set of great-grandparents. After all, LR is not a DNA match to my first cousin once removed who is also a Roben descendant and a descendant of this same set of my great-grandparents. I might have incorrectly tried to “figure her out” by seeing if she fit into one of my other families.

Part of the problem is that the connection to LR is somewhat distant and we share only one chunk of DNA. Had we shared more separate segments, the chance that she matched my first cousin once removed on at least one segment would have likely increased.

My “discovery” of this cousin and the fact that she and my much closer relative do not share any DNA served as a good reminder of how DNA is passed and how it is not passed. Just because she and my first cousin once removed share no DNA does not not mean that the connection to her is not through the same family as my connection to him. Of course, the connection is further back to LR because of the much smaller amount of DNA that we share.

Working through the DNA matches of some of my well-documented families has increased my understanding of DNA. That helps me when working with families whose paper record is not as detailed.